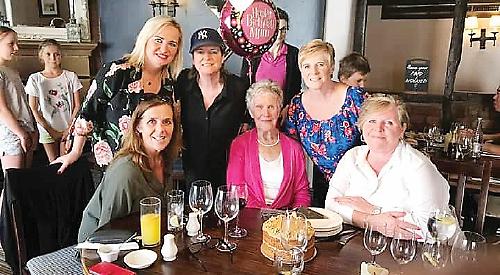 A WOMAN has retired after 44 years working at a Henley supermarket.

Diana Coleman was given a surprise send-off as she went for her very last coffee break at the Waitrose store, off Bell Street, on her final day.

Dozens of current and former colleagues were there waiting to present the 78-year-old with a bouquet of flowers and a bottle of champagne.

A table was laid out with snacks and drinks including a special cake with a message celebrating her long service.

Also present were Mrs Coleman’s third daughter Julie, 53, who has been a customer service representative at the store for 37 years, and her grand-daughter Lily Walsh, 20, who worked at the retailer’s sister business John Lewis in Reading for four years.

Her other four daughters also worked for Waitrose — Claire, 56, for about four years after finishing her education, Louise, 55, for a decade and Lena, 52, and Patricia, 46, for two years each.

Mrs Coleman, who lives in Abrahams Road, Henley, with Julie, joined the branch in September 1974, when it was based at the retail unit now occupied by Coppa Club.

She said: “I probably would have liked to get to 45 years but I don’t know what this winter’s going to be like and I’ve slipped on the ice in the past.

“I will miss everything about it but 44 years is a long time and I’ve been very lucky.

“Sometimes I think it’s funny that I went to a grammar school and ended up as a cashier but these days a lot of people would be very happy with a job like that. It’s secure, permanent, rewarding and very convenient.”

Mrs Coleman and her sister Margaret White, who now lives in Shiplake with her husband William, were born in Reading Road, Henley, to Sidney and Mary Hayes. The girls’ father worked at Painters grocery shop in Bell Street, which was demolished in the Sixties and replaced by the current Boots store.

Her first job was as an office clerk at Dennis Lords ironmongers in Bell Street, now the Rohan clothing shop, and then she did a similar role at the British Ermeto Corporation, an engineering firm in Maidenhead.

During this time she met her late husband Patrick, who was working as a builder on the houses in Watermans Road, Henley, and they were married in 1960. The couple briefly lived in Maidenhead before buying the house in Abrahams Road.

Mrs Coleman stopped working when Claire was born in 1963 but after having her youngest daughter 10 years later decided that she wanted something to occupy her time.

She joined Waitrose as an overnight shelf-filler shortly after her friend Anne Cummins, who still works at the store, and worked from 6pm to 10pm. She can recall working during the Three Day Week in the Seventies, which was introduced by the Government to conserve electricity during the miners’ strike, when shoppers were guided around the aisles by candlelight.

Mrs Coleman said: “It’s hard to imagine now but people just got on with it because they didn’t have any choice. In those days it’s not as though you could get your mobile out and complain about it on the internet.”

Staff used to weigh out loose produce for customers instead of them serving themselves but this was phased out in the early Eighties.

Mrs Coleman said: “So much has changed in retail since then. If you’d told me that one day people would be paying with their phones and watches I would never have believed you.”

The stock room used to be at the rear of the premises where the Regal Picturehouse cinema now is and the cinema was in a Thirties building on the current Waitrose site.

In 1986 the supermarket chain announced plans to demolish the old Regal but the move was opposed by residents including former Beatle George Harrison, who lived at the Friar Park estate, off Gravel Hill.

The campaign didn’t save the old cinema but it forced the inclusion of a replacement.

The old cinema was demolished in 1993 and the new Waitrose store opened the following year and the new cinema three years later.

Mrs Coleman said: “Whenever I go to the Regal now, I can’t help but think back to the old layout and wonder ‘what part of the old stock room would I be standing in now?’

“It was very sad to see the Regal go and I have to admit I also miss the old Waitrose.

“I remember the protest campaign was huge because it was a lovely Art Deco building and should never have been pulled down.

“It had a traditional organ which would rise up to be played during screenings and we’d all have a sing-song while the words were shown on the screen. With that and buildings like Painters and even the old station, we’ve lost quite a lot over the years.”

She said the new store opened just days after the old one closed, adding: “It took me a while to get used to it and even now I would struggle if you asked me where certain things are!”

In 1984, Mrs Coleman began working on the till during the day and she continued to work full-time after her husband died in 1987.

It was only when she turned 60 that she began reducing her hours so she could spend more time on her hobbies of gardening, reading and visiting the cinema and theatre.

Mrs Coleman said: “It was great working during the day because you had a chance to really get to know the customers.

“Some customers would be more honest with me than even their doctor. You realise that a person might have plenty of money but they still have the same stresses, fears and worries as everybody else. It was always nice to know that people felt they could talk to me about their lives and hopefully feel a bit better.

“I also liked having ‘regulars’ who would queue longer to speak to me instead of using a less busy till.”

Julie, who organised the farewell party with colleagues Eddie Banks and Angela Clark, said: “I’m very grateful for the help I had with these celebrations. It has been a great company to work for and they’ve really looked after our family over the years.

“I was very pleased with the turnout. Mum is an incredibly special lady and it shows how many people think the world of her.”

Speaking at the party, branch manager Alex Hume said: “Diana will be greatly missed by customers and partners alike. Our business is only as good as the people working within it and she is a testament to that.

“She has shown brilliant service and enduring loyalty and has made herself a friend to all.

“Diana, you have really left your footprints in our aisles and will be massively missed.

“We all thank you from the bottoms of our hearts for everything you have done and all your companionship over the years.We wish you love and all the very best for a well-earned retirement.”

He told the Henley Standard: “I’ve been here eight years and she is just a fantastic lady. She’s kind-hearted and always brilliant with our customers who know her well from shopping here over the years.

“She always has a smile and is willing to take on anything. It will be a great loss to Waitrose but it’s great that she will have more time to spend with her family.”