Woman runs for England for first time... at age 59 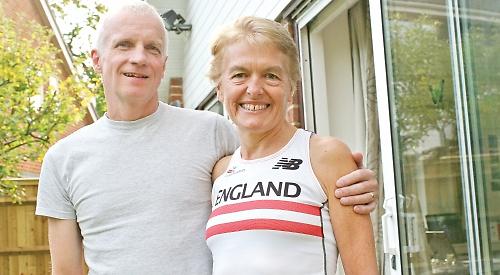 A GRANDMOTHER from Goring is to run for her country for the first time at the age of 59.

Jane Davies has been training for six days a week since April after qualifying for the Age Group Masters Invitation Challenge, which will take place as part of the Chester Marathon on Sunday.

She and other runners from across England will compete in the 26.2-mile challenge against a team from the six “Celtic nations” of Ireland, Scotland, Brittany, Wales, Cornwall and the Isle of Man.

Mrs Davies, who lives in the village with her husband Phil, earned her place by finishing this year’s Brighton Marathon in three hours and 41 minutes, well within the qualifying threshold of four hours.

This also earned her a place in next year’s London Marathon, which she had always wanted to enter.

She put herself forward for the event at the start of the year as she had recently returned to running after a two-year absence due to severe osteoporosis.

She felt lucky to regain her mobility after struggling at one point to even walk and wanted to challenge herself.

Mrs Davies said: “Running is meant to be very good for osteoporosis so I’ve taken my doctor’s advice to keep it up.

“It also makes you feel really good when you run every day — you always have a more positive outlook when you get back from doing it.

“I know I’m one of the fortunate ones because a lot of people end up on strong painkillers and it’s a horrible place to be.

“I was probably the fittest I had ever been before it set in but I’m a high risk because my mother had osteoporosis.” Mrs Davies, whose children Michael, 30, and Helen, 28, each had their first child this year, now does at least one short, speedy run every weekday and a longer run at the weekend.

She is sometimes accompanied by her husband, who is also a keen runner and triathlete, and whom she beat in the Maidenhead half marathon last month by more than 24 minutes,

Mrs Davies, who retired as a modern languages teacher at Pangbourne College in the summer, took up running when she was living in Wales in 1984. She ran her first 10km event along Swansea Bay in 1985, the same year that her husband ran in the London Marathon for the first time.

The couple moved to Purley in 1998 and joined the Reading Roadrunners club and then moved to Goring in 2006.

Mr Davies became less interested in running and more keen on cycling and swimming, which inspired his wife to take part in the last ever Challenge Henley triathlon in 2013.

The following year she started finding it increasingly difficult to walk due to back pain and was eventually diagnosed with osteoporosis, a weakening of the bone, in her spine.

The condition, which is more common in women, runs in her family.

Mrs Davies was referred to the Nuffield Orthopaedic Centre in Oxford, where she underwent treatment including painkilling injections.

She and her husband then spent several months travelling around the world, during which time the pain began to subside. When the couple returned she began doing short runs again, then entered the Woodcote and Goring 10km in 2016.

Later that year she tackled the Clarendon off-road marathon.

Mrs Davies said: “It was a tough event but I thought it was fantastic and with beautiful scenery. I’d said if I did another marathon I’d do something a bit different and it certainly was.”

Her training programme was written by GB running coach Nick Anderton, who found out about her challenge when he visited a Reading Roadrunners meeting shortly after she qualified at Brighton.

During this year’s exceptionally hot summer, she often ran alongside the Thames near Goring and would jump in the river to cool down.

She will be accompanied on the day by her husband, who will relay the result to her parents Richard, 90, and Ann, 87, who live in Suffolk.

Helen will be waiting at the finish line with her daughter Alexia, who is nine months old, while Michael will attend with his three-month-old son Zac.

Mrs Davies said: “I just fancied a challenge because at one point after my back injury I thought I’d never walk again, let alone run.

“Anything I’ve been able to do since my recovery feels like a bonus and although I still have some minor problems I recognise that I’m extraordinarily lucky to have improved so much.

“When it was at its worst, I couldn’t bear to even spectate at races because it felt like a world that was now closed to me but I never gave up hope and am grateful for the wonderful treatment I received on the NHS. When I saw some of the other patients at the hospital I realised how awful things could have been. I’ve never run to a schedule before but it seems to be going well and we’ll just have to see how I perform on the day.

“I’m not doing hours of running at every session but focusing on speed work and the quality of my technique. I’ve also tapered my mileage down well in advance so I should go into it rested rather than exhausted.

“My commitments to my grandchildren come first but fortunately running is quite a flexible sport. If you need to, you can put on a headtorch and go out running early in the morning or late evening.

“Before I retired I would often run to work, which was an easy way to get five or six miles in.

“I’m very excited about the marathon and I’ve had a lot of support from my family, who are all proud of me. Mum thinks it’s probably time for me to stop but you can run at any age and she understands how much I enjoy it.

“You have to take a bit of care if you’re doing it for the first time but it’s never too late to give it a go.

“When I look back at how far I’ve come, I’m pretty pleased because Phil used to be a lot faster than me and now it’s the other way round! He has been very encouraging and we’ve done some of the more steady training runs together.

“I’m also very happy to have made it into the London Marathon because it’s almost impossible to get a place through the ballot.

“At the moment I’m one of the oldest in my age group but by the time it comes around I’ll be one of the youngest in the next one up, so I should do well.”

Mr Davies said: “I’m proud of her and looking forward to going up and cheering with the rest of the family.”