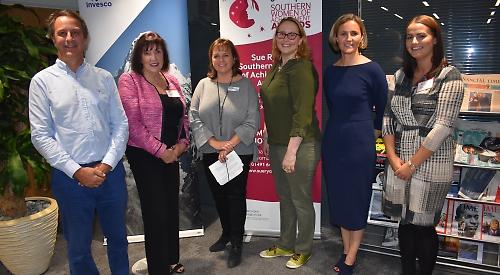 NOMINATIONS have opened for the 2019 Sue Ryder Southern Women of Achievement Awards.

The awards, now in their 12th year, were officially launched at Invesco’s investment hub in Reading Road, Henley, on Thursday last week.

Matthew Heath, chief marketing officer at Invesco, which is the main sponsor, said: “We’ve been supporting this event for 12 years and it’s something we are very proud of.

“Lots of people here have very close connections with and are immensely proud of everything that goes on at Sue Ryder.”

Jo Morgan, head of clinical services at the hospice, said she was looking forward to the awards ceremony in the spring.

She said: “It’s such an inspirational, fun and exciting evening that not only recognises the achievements of women across Oxfordshire, Berkshire and Buckinghamshire but also raises a lot of money for Sue Ryder.

“While care is free, the costs are more and more every year. We look forward to making the 2019 event the most successful yet.”

Awards ambassador Jackie Chappell, who won the businesswoman of the year award in 2013 and the lifetime woman of achievement award in 2015, said: “It changed my life in many ways but the biggest difference was the affinity with Sue Ryder.

“I know how important that care is to families and people at their end of their lives. Just having a nomination means a massive amount and there are so many amazing women out there.”

Anna Rowe, who won the business award in 2016, said: “I was humbled by the number of amazing women in the room.

“I’ve worked with Sue Ryder ever since and it’s the most amazing charity.

“There are so many truly magnificent women out there. As an ambassador, my job is brilliant.”

Mrs Jones was an award-winning caterer and founder of industry catering company CH&Co who died in 2015 following a long illness. Her husband Tim, who now runs the Dunsden-based company, presents the award.

The mentor award is new for this year and was introduced to celebrate the achievements of women who have helped shape the lives of others through offering guidance and encouragement.

The awards ceremony will be held on Friday, March 15 at the Royal Berkshire Conference Centre at the Madejski Stadium in Reading.

Fern Haynes, head of fund-raising at Sue Ryder, said: “These awards really are a wonderful way to honour the accomplishments of so many extraordinary women.

“The event also raises vital funds for Sue Ryder, so please do support us by nominating those wonderful women in your life.

“We all know someone who is deserving of recognition and you may underestimate how much it would mean to someone to be nominated.” The other sponsors are Higgs Group, publishers of the Henley Standard, digital marketing agency Grandesco and CH&Co.

Nominations are open until January.