Patrollers call it a day after saving 6,893 spawning toads 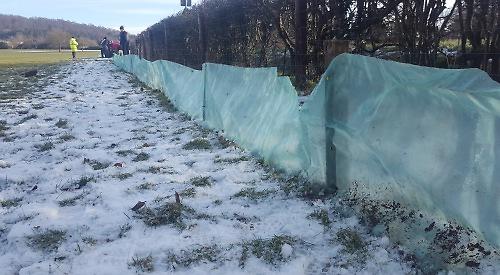 ALMOST 6,900 toads were helped across a busy road by this year’s Henley Toad Patrol.

The amphibians were collected by volunteers at a temporary barrier which was erected on the north side of Marlow Road.

They were then taken to their spawning ponds at Oaken Grove Wood, near Henley Business School.

The final toad heading for the pond to spawn was collected on Monday evening  and volunteers will remove the barrier tomorrow (Saturday).

Professor John Sumpter, a member of the patrol, said: “Everything went very smoothly this year.

“More than 40 volunteers, some of whom live locally, but others as far away as Maidenhead, Twyford and Reading, participated, with more than a dozen being present on busy evenings. Their very considerable efforts meant that relatively few toads got on to the road, where they are highly vulnerable to being run over by traffic.

“The volunteers are very grateful to the Culden Faw Estate for allowing them to conduct the toad rescue each year.

“A lot of toad and frog spawn is now in the large pond. In fact, tadpoles have already begun hatching from the spawn laid by the first wave of toads.

“Over the next two months the tadpoles will grow until they are big enough to undergo metamorphosis, when the aquatic tadpoles develop lungs, grow legs and leave the pond. In June, tens of thousands of tiny toads and frogs, each no bigger than a thumbnail, will head across the field and road and into Oaken Wood.

“Those that survive for the next two or three years will then, early one spring, head back to the same pond from which they came to reproduce.

“Some will probably be carried across the road by the same volunteer who, a few years earlier, carried their mother and/or father across the same road.”

In total this year, 6,893 toads, 269 frogs and 229 newts were collected at the barrier and taken to the pond on the other side of the road.

Henley Toad Patrol was formed in 1987 and has typically rescued between 6,000 and 10,000 specimens every year. About 30 members take part every night.