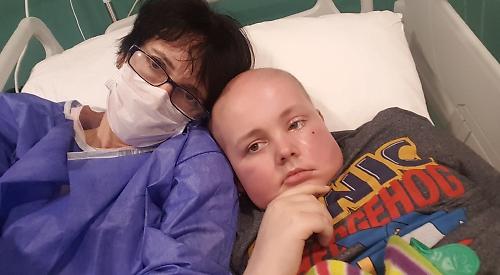 A BOY battling cancer has returned home after spending more than two months in Turkey finishing his treatment.

The last of these was a high dose of chemotherapy which meant he had to spend three weeks in an isolation ward with his mother Toni at Ankara Memorial Hospital.

His most recent MRI scan showed that only a tiny amount of cancer remained and Charlie will return to Turkey next month for another scan to see if the treatment has worked.

Mrs Ilsley said they were delighted to be back home in Buckingham Drive, Emmer Green, with Charlie’s father Mark, a builder, who had to continue working so could only visit occasionally.

Charlie, a pupil at Highdown School in Emmer Green, said he felt much better and he was looking forward to catching up with friends and going swimming.

He also wanted to go on holiday to Hawaii.

His high dose chemotherapy comprised three sessions a day for a week. This weakened his immune system and he couldn’t leave the hospital ward in case he picked up an infection.

Mrs Ilsley said: “You have a room and there’s two sliding doors. There are no door handles, you just wave your hand and the doors open.

“Charlie had to stay in that room and I wasn’t allowed to eat or drink in there. You’re not allowed to go out because you musn’t catch anything.

“We were expecting Mark to be able to come in to say ‘goodbye’ but all we could do was wave goodbye to him through the glass. Mark was in tears, Charlie was crying and I was scared because it was like, ‘this is serious’.

“I wasn’t allowed to take in a magazine or a book, it had to be a Kindle. We were allowed a laptop and Charlie’s Playstation but they had to be taken away and cleaned.

“There was no food allowed in the room apart from what they brought Charlie for dinner and that had all been wrapped in cling film and cleaned.

“You know in ET where all these people come in in suits? That’s the only way I can explain it what it was like. It was scary but then when I got used to it, it was okay and they were really friendly.”

After four days of treatment, Charlie developed mucositis, a painful inflammation and ulceration of the mucous membranes lining the digestive tract. This is a common side effect of chemotherapy and radiotherapy.

His face swelled up as a result of all the fluids he was given and he developed sores on his body. He also began hallucinating and talking in his sleep.

Then he experienced severe pain in his side and had to have a scan on his stomach, which was clear. He also had a CT scan that was clear.

Mrs Ilsley, who spent every day at her son’s bedside, said: “You go to bed thinking, ‘That’s got to be the worst day, it can’t get any worse than that’ and then it does.

“I called Mark and said, ‘I can’t do this by myself, you’re going to have to come out’ but there was nothing he could to, he wouldn’t be allowed near us.

“I did prepare myself as I knew what was going to happen but I didn’t prepare myself for an emergency brain scan and being in a different country by myself and totally alone really. At one point Charlie said, ‘I just want to die anyway’ and I said, ‘Right, so do I!

“It was the worst week but that’s what we had asked for. We begged for a high dose because that’s the only thing that works.”

When the treatment had finished, Charlie had a stem cell transplant to help boost his immune system but then had to wait for his bone marrow to recover before he could fly home.

Mrs Ilsley said: “Nothing happened until, I guess, March 15 and 16 when he started to pick up and feel a little bit better. On March 24 we came out of isolation.”

Once they had left isolation, Mr Ilsley flew out to be reunited with his wife and son.

He said: “Toni and I had spoken every day and I could talk to Charlie. It was horrible going to work when all you think about is them. I was just thinking of the next time I could go out there.”

Charlie continued to recover and slowly the amount of antibiotics he was given was reduced and his ulcers began to heal.

He and his mother were finally given the go-ahead to fly home on Friday.

Charlie’s platelets and haemoglobin are not yet at the levels they need to be but the family will manage this with the help of the Royal Berkshire Hospital in Reading.

Mr Ilsley flew to Turkey on Saturday and on Sunday evening the family went out for a meal together before flying home the next day.

Mrs Ilsley said: “For the last two weeks Charlie and I have been saying, ‘I can’t wait until we get on that plane and land back in England’.

“We hadn’t had a bath for nine weeks — we’d had a shower — and I had been sleeping on a pull-out chair. When I got in a bed I thought, ‘this is so nice’.”

She added: “I’ve met so many nice people — parents and nurses — and everyone there knows who Charlie is, he’s so popular.

“He has coped with it really well. He’s a strong little boy and he’s a brave little kid. I wouldn’t want to go through what he has.”

The family are now looking forward to a belated celebration of Charlie’s 12th birthday, which was on March 4, with a meal out and hope to enjoy a holiday in America later this year.

Charlie first showed signs of being ill in March 2015. Doctors discovered a tumour about the size of a snooker ball in his brain. Another tumour was found on his spine. He underwent a 10-hour operation in April that year in which the brain tumour was partially removed.

But in March last year two tumours on his spine were discovered and he had CyberKnife treatment. This is not available to children at the John Radcliffe Hospital in Oxford, where he’d had surgery and chemotherapy previously.

Mrs Ilsley said: “I hope that he doesn’t ever have to go through it again. All I want from life is for him to be healthy and have friends, we don’t care about anything else.

“When you see Charlie in school with his friends you can see how withdrawn he is. He can’t walk properly, he can’t see well and he looks different.

“But he walked out of that hospital and not many kids do. Charlie still lives his life and he still does what he wants to do.”

The family still need about £25,000 towards the cost of Charlie’s treatment and their flights.

To make a donation, visit www.gofundme.com/cyberknife-treatment-for-charlie