Please save my husband 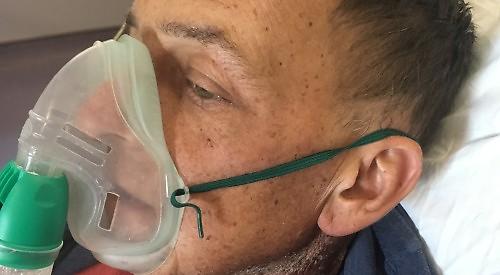 THE family of man with a rare form of cancer is trying to raise £140,000 after he was denied treatment on the NHS because his tumour is in the “wrong” place by an inch.

Nick Dipper, 51, was diagnosed with the disease in his pharynx, which connects the back of the nose to the back of the mouth, last summer. Later, he was told that it had spread to his bones, lung and liver.

The father of two was given just a year to live before his wife Lisa heard about a pioneering treatment called immunotherapy, which helps the body’s immune system recognise and attack cancer cells.

However, after being initially told that the health service would offer the treatment, they discovered that in fact the NHS was only licensed to offer it up as far as the mouth and that they would have to go private instead. Now the couple have started an online appeal for the £40,000 needed to begin treatment and another £100,000 for the rest of the course.

Mr Dipper, a project manager, lives with his wife and their three-year-old twins Ely and Ezra in Highmoor. The couple moved to the area eight years ago.

Mrs Dipper, 37, said: “For a few years life was perfect and we felt so lucky watching our boys develop from premature babies into cheeky, bouncy toddlers.  But it went badly wrong. Unfortunately, on June 21 our world was completely shattered.”

Mr Dipper, who had been suffering from severe headaches for months, was diagnosed with nasopharyngeal carcinoma, where malignant cells form in the tissues of the upper part of the pharynx.

Mrs Dipper said: “Nick started having headaches and they got more severe around October 2017 to the point where he was really struggling.

“We went to the doctors and they gave him in excess of five lots of antibiotics and kept passing it off as sinusitis. By February or March last year he had lost two stone in weight and I said it was ridiculous, he was in agony and nothing was  working.

“We were referred to the ear, nose and throat department at the Circle Hospital in Reading where the doctor took one look at him and said, ‘You look like you’ve just got off the night shift’.

“He stuck a camera up Nick’s nose but couldn’t go any further because of the tumour. Nick was admitted to accident and emergency 24 hours later, had the biopsy and tests and then we found out it was this very rare type of cancer.”

Mr Dipper began chemotherapy treatment immediately and then had radiotherapy as well.

The treatment led to severe side effects as it aggressively targeted the hard-to-reach tumour.

Mrs Dipper said: “Nick lost the ability to swallow or speak, lost his hearing, taste and vision to a degree and his skin was burnt inside and out — but he did really well.

“The treatment had to be severe as it was our only chance to attack the tumour due to the location making it inoperable.”

In October, Mr Dipper suffered from a bout of pneumonia, brought on by his inability to swallow, when he returned home from hospital the night before his sons’ third birthday.

Worse was to come in December when Mrs Dipper woke up early one morning to find her husband drowning in his own fluid and had to rush him to hospital.

She recalled: “At 5am I rolled over before the alarm was due to go off and he was drowning. I could hear gurgling.

“I rang 999 straight away. The boys were in bed so I had to get them sorted and then we were in accident and emergency.

“Nick’s lungs had collapsed and his kidneys had packed up. He had got an infection. It turned out to be one of the most harrowing scenarios ever. He was staring at me like, ‘help me, help me’.

“Nick had developed sepsis — he picked up a bug and his immune system wasn’t strong enough to cope.”

Mr Dipper suffered multiple organ failure. His kidneys were shutting down, which meant he was overdosing on morphine as his body could no longer process it, and one of his lungs collapsed.

He was transferred from the Royal Berkshire Hospital in Reading to critical care at the John Radcliffe Hospital in Oxford for specialist cardiothoracic surgery where two blood clots were removed from his right lung.

Mrs Dipper recalled: “I was holding one hand, a junior doctor was holding the other and we were crying while Nick was screaming ‘no more’.”

Her husband spent six weeks in hospital and then had a week of recuperation at the Sue Ryder hospice in Nettlebed.

It seemed that he was out of the woods when an MRI scan in January suggested that the cancer had gone.

However, days later the couple learned that it had spread and there was nothing more the doctors could do.

Mrs Dipper said: “At the Royal Berks they had told me they had found something on his left lung, a funny nodule. I must have asked somebody every day, ‘what about the lung’ but we were left hanging. Because of the sepsis it was impossible to tell if it was an infection or cancer.”

On February 28, the couple were told by a doctor that the cancer had spread to Mr Dipper’s liver, his lung and five bones.

Mrs Dipper said: “She said that the only thing she could offer was palliative chemotherapy and ‘you’ve got one year’.”

She began immediately looking into alternative treatments and was recommended immunotherapy by an oncologist friend.

She suggested the treatment to the consultant at their next meeting and was initially told her husband could have it.

Mrs Dipper said: “It felt like we’d been given a lifeline.

“We were told to wait until the pain started before looking for a plan and then it would be a two-year treatment. I said, ‘I’ll be singing from the rooftops if we get to two years when you’ve been giving us one’.

“Nick got considerably worse in terms of pain and they said that is when the cancer starts kicking in. I went to a meeting for pain management and when I came out, they said they were really sorry but we couldn’t have the therapy.”

The couple were told that the NHS licence for immunotherapy treatment for head and neck cancer finishes at the oropharynx (mouth), not the nose.

Mrs Dipper explained: “The clause in the licence stops at the oropharynx and does not include the nasopharynx.

“I can get it in this country privately but you can’t get it on the NHS. This is because the cancer Nick has is so rare that there weren’t even enough people to complete the trials when the drug was being tested.

“Nick asked, ‘Does it come down to money’ and they said, ‘Yes’. I was really cross.”

Mrs Dipper researched the treatment and discovered how much it would cost.

She said: “We haven’t got £140,000. We’ve got a mortgage and I’ve got to think of all eventualities. If something does happen to Nick I’m left here with two kids on my own and I’m hundreds of miles away from family. There isn’t enough security in the treatment to know what’s going to happen or whether it’s going to work.”

The couple have started an online appeal and their GoFundMe page has already raised more than £26,000. Some of this came from Mr Dipper’s company.

More money has come via a Facebook page for Mrs Dipper’s girlfriends from caravan holidays.

She said: “They organised a bunch of flowers for us and ended up raising £3,650. That level of love and support from strangers you have mey on the internet, I’ve never come across a group of girls like it.

“They are all over this, trying their level best to support us as much as physically possible. There are a lot of shares and likes going on. If it wasn’t for them we wouldn’t have the money we have.

“We have made arrangements to meet up and we are going under the name Team Dipper.” Mr Dipper has been unable to work since his diagnosis.

His wife said: “We need a fair bit more money for this treatment to take place. We just don’t have that sort of money. If anyone can help us we’d be so grateful.

“Anyone who has sons will know how much they love and need their daddy and I can’t bear the thought of bringing up my boys alone and being without Nick after everything we’ve been through. I don’t know whether he’s going to live or die, hope or no hope. It’s just a horrible situation to be in.

“It has left us feeling desperate. We’ve had to exploit our financial circumstances with a death sentence hanging over our heads.

“I don’t want to be a widow at 37 and a single mother bringing up two children. I don’t want to be explaining to the kids where their dad is or choosing between treatment for my husband or a memory box for the kids from their dad. We’ve been through too much grief already.

“For any donations I want to thank you from the bottom of my heart on behalf of Nick, myself and our little boys.”

• This week, the couple were told that if Mr Dipper has the treatment, his chances of survival will increase from 15 per cent to 70 per cent.

To make a donation, visit  www.gofundme.com/team-dipper-needs-you