We should all talk about death, says funeral family 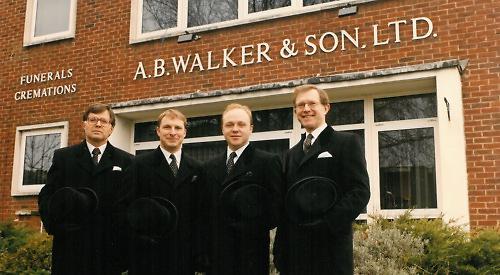 WE need to talk more about death.

That’s according to the Walkers, who are, perhaps not surprisingly, the directors of a funeral business.

Julian, Matthew and Melissa Walker run A B Walker, which has branches in Henley and Caversham and has been in their family for five generations.

They say that failing to discuss the subject of death can cause more pain for relatives when it occurs.

They are encouraging people to make their funeral wishes clear so loved ones don’t have to make too many decisions while they are still in shock at their loss.

This could involve taking out a funeral plan, in which the service is planned and paid for in advance through a funeral director or insurance company, or simply by leaving instructions in a will.

The Walkers, whose firm has offered a free bereavement counselling service since 2013, say people should also be aware of the different ways in which grief affects us.

They say employers in particular should understand that some people take longer to adjust than others and should not feel pressured to get “back to normal”.

They support Dying Matters Week, which starts on Monday and encourages people to think of death as a natural stage in everyone’s life.

Hospice UK, which organises the annual initiative, says the subject has become taboo and this deters people from planning for a “good” death.

Julian, who lives in Peppard with his wife Nicola and children Georgie, 16, Hettie, 14, and Monty, 12, urges caution over the growing number of online businesses which offer cheap funerals with no service.

He says this might be tempting for families who haven’t previously considered their options but they may regret not fully celebrating the life of the departed.

He explains: “We understand why there’s fear about discussing death because the trigger is often an
illness or personal circumstances but we would promote talking about it routinely rather than being forced into it.

“Because people don’t talk about death as much as they should,
they’re not always prepared and don’t have as good an understanding of what they or a family member would like.

“When looking online, people can be misinformed and tempted to avoid certain options which in the longer term proves disrespectful to the situation or hard to adjust to afterwards. They may make some choices, such as a ‘no service’ funeral without resolution, simply because there hasn’t been any discussion as to what the person who has died would choose for themselves.

“Funeral planning or just listing some wishes with friends and family or a solicitor often avoids a high level of distress yet the majority of people leave no indication of what they would like.

“Sixty per cent of people who arrange funerals are women and they’re often left to make decisions for their husbands or other male relatives without any guidance.

“More than half of funerals are arranged for parents or the preceding generation and, again, often there’s no reference point.

“Our role, in addition to providing the service, is to advise on common choices appropriate to the age, habits, interests and religious beliefs of the individuals who’ve died to develop a funeral to suit the family’s needs.

“It’s an extremely trusted role which we take as a privilege. We have to get a sense, through the family, of who the person was.”

Mr Walker says most people take out funeral plans after being bereaved because they don’t want relatives to struggle with their own death.

“The benefits are both financial and emotional,” he says. “At the very least we would guide people to make a will and to specify who’s going to act for them and any choices they may wish to be followed.

“Those entering care homes or hospices are often asked for that information but, ironically, husbands and wives who live together for a lifetime don’t often discuss it between themselves.

“The Dying Matters campaign wants people to talk about it without it becoming morbid, to create a shared understanding of what might happen and what someone might want to happen.”

A B Walker was founded in Reading by Benjamin Dunn in 1826 and passed to his son, also Benjamin, before being taken over by Alfred Blythe Walker in the 1870s.

It had only the one office until 1994, when it opened a second in Bracknell, followed two years later by the branch in Reading Road, Henley. It then expanded to Wokingham, Thatcham, Gosbrook Road in Caversham, Maidenhead, Tilehurst and Woodley.

It now employs 60 people across the nine sites and has a fleet of nine hearses.

Brothers Julian, 50, and Matthew, 48, grew up in Kidmore End Road in Emmer Green with their parents Tony and Janice, who ran the firm with Tony’s brother David until they retired in 2004.

The boys attended Reading Blue Coat School in Sonning and when they were in the sixth form would carry out odd jobs like cleaning the hearses or carrying coffins during services.

Julian studied clinical biology at the University of Sheffield, then worked in unrelated jobs after graduating before joining the business in 1994.

Matthew went into the construction industry and ran his own firm before following suit in 1997.

In the same year he married Melissa, a former Henley woman whom he had met five years earlier, at St Peter’s Church in Caversham.

The couple now live in Goring with their children Oliver, 20, and Charlotte, 18.

Julian says: “It wasn’t our parents’ expectation that we would go into the business and wasn’t pre-ordained or pre-conceived — it rather more evolved over time from a relatively loose relationship to the realisation that this was a career path.

“We did pick up on what our parents did — certainly the challenges of working in a family business, of employing people and the general commercial pressures of running a business were frequently discussed.

“We grew up to understand it was an extremely sensitive role. It was constantly stressed that we’re involved in a very personal aspect of a family’s life at an extremely distressing time.

“We knew it was an area where you always had to tread very carefully and it also carried the responsibility of operating 24 hours a day, seven days a week.”

Mrs Walker, 47, grew up in Northfield End, Henley, with her parents Pru and David and attended Gillotts School and The Henley College before working in a series of secretarial and customer service management roles.

She joined A B Walker in 2002 to help her mother-in-law manage the finances and just over a decade later she launched The Link, a six-week group counselling course run in partnership with the bereavement charity Cruse. She has trained as a counsellor herself and was appointed a company director three years ago.

Mrs Walker agreed to run The Link after she and the other directors realised there was little support for families after funerals.

She explains: “We felt a responsibility to show some leadership in bereavement care, which isn’t regularly offered because death isn’t talked about and it’s not obvious where you can go to talk in a way that’s effective.

“Hospices can offer tea and sympathy but you have to pay for proper counselling whereas we don’t charge anyone for our groups at all.

“There’s also a lot of support for deaths in specific circumstances, such as a particular disease or the death of a child, which is great of course, but that support isn’t there for the bulk of deaths.

“At the end of the day, everyone will experience death, both their own and that of the people around them, so it’s crazy not to talk about it.”

The company has no plans to expand but could work with employers to help them support employees who have been bereaved.

Mrs Walker said: “There’s sometimes a gap in understanding the impact. It can affect a person’s focus, their productivity and how they interact with others.

“There’s an expectation that by ‘week X’ somebody should be all right but we’re all individuals and the process isn’t the same for everyone.

“We see anger, frustration and general extremes of behaviour but there’s no single, clear direction so there’s a need for flexibility in how society supports those experiencing a bereavement.

“Years ago, a person would wear an item of black clothing to show they were in mourning but now when you’re walking around the supermarket you’ve got no idea as to who’s going through it.

“People can look fine while experiencing total bewilderment, numbness and a whole range of emotions that come with adjusting to loss. Their lives will never be the same again because it isn’t something that’s ‘cured’ or ‘goes away’, only something you learn to live with.

“Some people find that easier than others and there’s no right or wrong response.”