I lost five stone by going for good walk every day 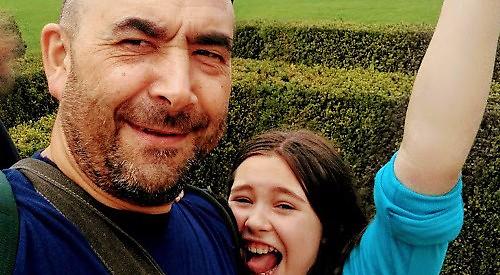 A MAN has lost five stone by walking footpaths in and around his Henley home every day for two years.

Jose Griffin weighed about 18 stone when a doctor warned him that his health was at risk during a consultation in March 2017.

The 51-year-old, who lives in Gainsborough Hill with his daughter Annabel, 12, and partner Martine Greenhalgh, was recovering from flu and his blood pressure was getting dangerously high.

His GP Dr Matt Norman, of the Bell Surgery in York Road, said he would have to start taking medication if he didn’t lose enough weight to bring it down naturally.

Mr Griffin, a booking agent in the music industry, had piled on the pounds in his twenties as he often ate junk food between gigs while playing guitar for a touring rock band.

He had lost up to two stone in the past by dieting but always put the weight back on and couldn’t follow Dr Norman’s initial suggestion of a Mediterranean-style diet as he dislikes most vegetables.

Instead he was advised to walk further and faster on his daily walks with his Jack Russell-cross Honey and to regularly swim as this does not place stress on joints.

This was important as he suffered a knee injury 13 years ago and although he plays indoor football at Henley leisure centre several times a week, he can only be in goal.

Until then, he had swum only occasionally and walked short distances with Honey or to pick up Annabel from Sacred Heart Catholic Primary School. She now goes to Gillotts School.

Mr Griffin started his regime by walking two or three laps of Makins recreation ground, off Greys Road, then walking to the end of Manor Road and back, a distance of less than 2km. He could swim 20 lengths of the pool at the leisure centre before running out of energy.

To stay motivated, he signed up for the 120km Camino de Santiago, or Pilgrim Walk, from Santiago de Compostela to Finisterre in Spain.

He was encouraged by his brother Antony, 49, a postman of Luker Avenue, Henley, who has completed the walk himself more than 15 times.

Mr Griffin completed the five-day challenge in June last year by which point he had lost three stone and his blood pressure was at a safe level.

He then upped his training by taking 3km and 4km walks around Harpsden Woods and Pack and Prime Lane, off Gravel Hill, before exploring new areas using old maps borrowed from his partner’s father Martin Greenhalgh, their next door neighbour.

He later bought Ordnance Survey maps covering Reading, Watlington, Goring, Maidenhead and High Wycombe and would highlight every path after walking it for the first time. He has covered most routes on the Henley map and typically walks between 5km and 7km every morning, which takes between 60 and 90 minutes.

Mr Griffin said: “It’s been fascinating discovering what lies either side of the roads we take every day to Reading or High Wycombe. For 30 years, those woods in the distance or the fields just the other side of the hedge were a mystery to me.

“I have since found a number of routes I can walk while discovering lots of side roads and tracks that in a thousand years I’d never have needed to go down.

“Along the way I’ve discovered some lovely buildings, old cottages, converted pubs and farm buildings, churches and the history that goes with them all.

“There are villages that have lost their school, post office or convenience store but still display the evidence of their existence in their house names.

“I’m so very fortunate that my life and work balance affords me that time to myself each day. It may be just an hour, but it can’t be underestimated what the great outdoors has to offer the soul and mind. At a time when mental wellbeing is of such concern to us all, this free therapy can work miracles. Nothing is better to clear the mind than a peaceful walk and just being a few steps from traffic or civilisation can make you feel a million miles away.”

Mr Griffin swims at least 120 lengths in two or three sessions per week, sometimes completing 60 at a time without resting. He can also run 10km whereas previously he “couldn’t run a bath”.

He said: “It was actually quite easy because I never pushed myself to do anything I couldn’t. I increased everything very slowly apart from possibly the first time I ran 5km, when I put in an extra bit of effort just to hit that milestone.”

Mr Griffin grew up in the town and also attended Sacred Heart and Gillotts. He left school at 16 to work in retail and later became manager of Champions ironmongers in Reading Road, which is now occupied by the new Mini World Gift shop.

He says he barely recognises himself after his drastic transformation and believes it will last as he has changed his life in a sustainable way rather than following a short-term “diet”. He has not given up any foods and only watches his intake during the week, allowing himself to eat as he wishes at weekends.

He still doesn’t enjoy many vegetables but does eat fruit and salad as well as enjoying crisps and ice cream regularly.

Mr Griffin said: “I went from being compared in looks to Andre Agassi to becoming likened to Bob Hoskins on account of all those burgers and pizzas I’d eat while on the road.

“When I changed my diet and started doing even a little bit of exercise the first stone fell straight off. It slowed down after that but I kept at it and I’d like to lose another stone as I’m bound to yo-yo a bit. I don’t eat particularly healthily as I’ve never had the time or the inclination to cook so I still eat things like pizza or fish and chips but there’s a lot more variety these days.

“ I often joke with people that I took the wrong turn at the mid-life crisis junction and the sports car or motorbike never got a look-in.

“It has been nice to have people remark on the change. While it’s mainly women, I’ve also received comments from men which surprised me a little as we rarely discuss things that didn’t happen on a football pitch.

“I’ve also had the odd person admit they were scared to ask in case the weight loss was not intentional. I guess that’s the spin my age has given this.

“I’ve taken great pleasure in hearing how inspirational it has been and I’m happy to share the story because if I can do this then anybody can.

“The biggest reward has to be the way I feel in myself: fitter, healthier and more alive than ever and, perhaps best of all, maybe I’ve even increased the years in which I get to see my daughter grow.”