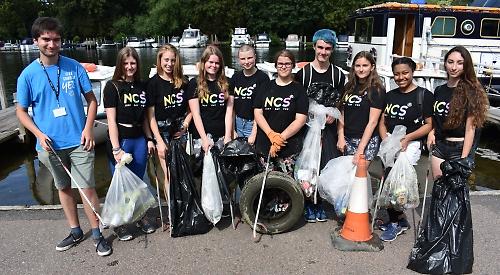 A TRAFFIC cone, tyre and condoms were among items found by teenagers cleaning Henley and the River Thames to raise awareness about littering.

The teenagers, who live in and around Henley, are taking part in National Citizen Service.

In order to complete the social action stage of the government-run programme, which aims to inspire change in the community, they were given two weeks to organise an activity in their local town.

About 40 young people took part and were split into four teams.

One group called Team Revival cleaned the river and aimed to collect about 20 bags of litter on Monday and Tuesday. They found items including glasses, beer bottles and cigarette packets.

They then built a statue from the rubbish they collected, which was unveiled at the River & Rowing Museum’s community gallery today (Friday).

The group had also asked shops such as Sainsbury’s in Bell Street for plastic waste they could use. It also approached Gillotts School in Gillotts Lane and The Henley College in Deanfield Avenue.

Eleanor Whittle, 16, from Rotherfield Greys, said: “My idea was I just wanted to take all the litter in and around the river and just keep it clear and make it look nicer but the waste is affecting other places, lives and habitats as what we do over here floats downstream.”

Anna Husser, 16, of Cromwell Road, Henley, said: “We did not realise how much rubbish actually gets thrown. When you collect it, there’s actually so much we can just recycle instead of producing more.”

Joanna Gardas, 16, of Adwell Square, Henley, said: “I think everybody could take part and do their part in cleaning the pollution and making it better.”

Sofia Coderque, 17, of Meadow Road, Henley, added: “We need to take responsibility. I think it’s important that all of us try and make a change.”