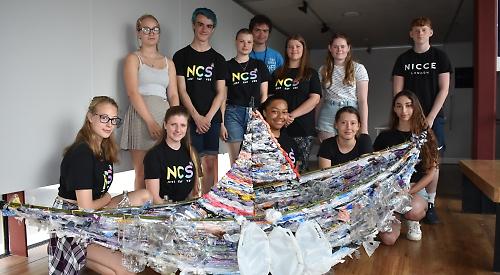 TEENAGERS unveiled a boat sculpture made from litter at the River & Rowing Museum.

They were raising awareness about the problem of litter in Henley and the River Thames.

The sculpture, called HMS Revival, is made from discarded bottles, bin bags, shopping bags and plastic cups held together with bamboo, rope and glue.

The sculpture will be displayed in the museum’s community gallery until December as part of its Nature on Your Doorstep exhibition.

The 12 youngsters, most of whom live in the Henley area, took two days to make the piece for the social action stage of their National Citizen Service, a voluntary development programme for teenagers.

They spent the beginning of last week collecting the rubbish on a launch supplied by pleasure boat hire firm Hobbs of Henley. They found condoms, a traffic cone and a tyre, among other waste.

Anna Husser, 16, of Cromwell Road, Henley, said: “It was a big team effort. It was fun but we are relieved to finish. It proves we can do amazing things.”

Daniel Anderson, 16, who lives at RAF Benson, said: “It’s nice to know you are actually making an impact and that this is raising a lot of awareness.

“It quite a positive thing for the community and I think it will get quite a good reaction. It shows just what young people are actually capable of and that we do care about the environment and we can contribute.

“A lot of people do look down on our generation as being addicted to our phones. This proves we can get out there and achieve things.

“It has been really good having everyone co-operate on a single project. Even if it goes unnoticed, we have done quite a lot for the community.

“Special thanks to Hobbs and a massive thanks to the River & Rowing Museum for letting us exhibit the boat there.”

Lucinda Elwell, 16, of Ashford Avenue, Sonning Common, said: “It proves that we do care. Henley is a nice area and doing things like this just makes the area nicer.

“It’s not just our age, it shows everyone it’s really important. It was been a lot of fun — we all get along really well.”

Team leader Tom Wellesley, 19, from Oxford, said: “I think everyone enjoyed themselves and I was impressed by how independent they have been. I’ve not really had much input into the design, which is great.”

Helen Cook, head of learning at the museum, said: “We are delighted to be hosting the piece.

“The young people have done a fantastic job. The fact they wanted to make it into a boat was the perfect fit for us. I think it’s brilliant — absolutely fantastic.”