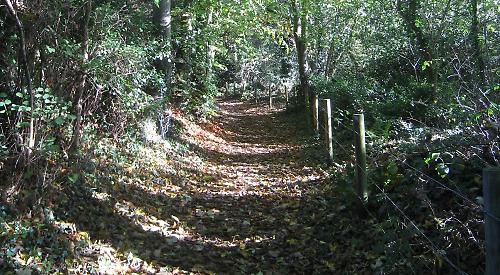 A HENLEY man has criticised a council for failing to consult on plans to cover a bridleway on the outskirts of the town with asphalt.

Trevor Howell says he and his neighbours in Blandy Road should have been asked their views on the proposal by housebuilder Crest Nicholson, which was scrapped after initially being approved by Oxfordshire County Council, the highways authority.

The company planned to resurface the 1km path between Gillotts Lane and Peppard Lane as part of its development of 163 houses at the former Highlands Farm industrial estate, off Greys Road.

This was one of several schemes to improve the new residents’ access to the town and encourage them to walk or cycle rather than drive.

Crest Nicholson’s contractors turned up to start the work but the council called them off at the last minute following complaints that asphalt was unsuitable in a rural location.

Several residents had raised objections, as did Henley county councillor Stefan Gawrysiak and the British Horse Society after Mr Howell alerted a friend who is a member.

The society said asphalt would render the path useless as it presents a slipping hazard for horses so an alternative material should be used.

Mr Howell said residents received a letter about the work only 10 days before it was due to start and this simply said the path was to be “improved”.

He said the resurfacing would have gone ahead if people hadn’t called the contractors to find out more.

It was briefly mentioned in Crest Nicholson’s planning application to South Oxfordshire District Council in 2016 but he felt a separate consultation should have been carried out.

Mr Howell said: “There has to be more transparency about plans like this, which affect people’s immediate surroundings.

“And what is the point of asphalting a picturesque country path so that people from Highlands Park can get to Tesco more easily when Blandy Road runs parallel to it?

“The improvement work should never have been appended to the planning application for Highlands Park, half a mile away. To argue that the public had the opportunity to respond during consultation on that application is stretching the bounds of reasonableness.”

The British Horse Society says natural stone would be more appropriate but if a sealed waterproof surface is needed it should be bonded rubber, which offers better grip.

A spokeswoman said: “We’re aware of the concerns raised regarding the surface. At this stage we’re in talks with the county council to put across the views of equestrians and the impact this would have.”

The council says it is now working with Crest Nicholson’s contractors to choose a new material and is “actively pursuing” a final decision.

Residents’ views will be sought before anything goes ahead.

The council and developer say they could also install measures to prevent motorbikes and small vehicles using the resurfaced path illegally.

Crest Nicholson says it is working closely with the council to ensure the revised works take place as soon as possible.