My Ethiopian adventure in aid of Poppy Appeal 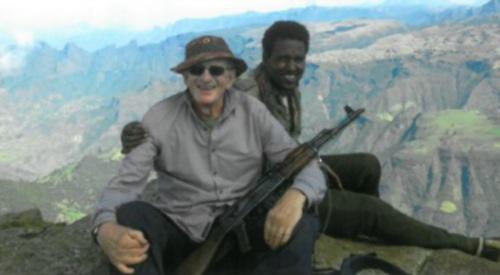 AN 84-year-old man climbed the second highest mountain in Ethiopia in aid of the Poppy Appeal.

John Green, who is chairman of the Henley and Peppard branch of the Royal British Legion, scaled Bouhie, which stands at 14,600ft.

He had hoped to climb the highest peak, Ras Dashen, which is about 300ft higher, but he pulled out due to exhaustion.

Mr Green was part of a group of 15 walkers and local guides who set off from the capital Addis Ababa on November 8.

The locals nicknamed him Baba or “father” because he was the oldest person there by about 30 years.

Also part of the group was Rebecca Stephens, the first British woman to climb Mount Everest, whom he has known since 2001 and previously trekked with.

The trek took place in the Simien Mountains National Park in northern Ethiopia. Its rugged terrain includes escarpments, deep valleys and a high plateau and it is home to rare walia ibex and gelada baboons.

When the group arrived at the first camp, they were told that they would be accompanied by three armed men, two with Kalashnikovs and another with an older rifle.

Mr Green said: “When we asked why that was necessary they just said that there had been incidents and we didn’t question further.

“However, there was no sign of any problems while I was there.”

Each person had to carry a pack containing food and water and a change of clothes, while the group’s tents were carried by the guides on mules, who also erected them each night at camp.

Mr Green said: “One of the men, Jemal, would help carry my bags. I did get increasingly tired and he carried my rucksack most of the time.”

The group began with small climbs to help them acclimatise to the increasing altitudes, where the air is thinner.

Mr Green said: “We would go up well over 10,000ft. Some of us had a problem with altitude sickness but I had no sense of it at all.”

On the second day there was an accident when the group tried to cross a river, which was about 20ft across.

Mr Green said: “It was swollen because of the rain that fell the previous night. The idea was that we would get on a horse and cross to the next camp site.

“The first of our party got half way across and was waist-deep in the water. The horse lost its footing and the lady fell off but her right foot was caught in the stirrup and she was being swept downstream.

“Our guide, Yego, immediately went in and saved her and was able to get her to the bank.

“A few metres further downstream was a waterfall so it could have been serious. The amazing thing was she wasn’t hurt.”

Almost immediately after the rescue, the walkers heard gunfire overhead but there was no cause for alarm.

Mr Green explained: “We thought, ‘what the Dickens was that?’ but this is a custom by the locals to get rid of evil spirits from the river and they said that was why the lady was unharmed.

“After that it was decided that it was too dangerous to cross the river so we diverted for four hours over another mountain to the camp. We ended up walking 11 hours.”

Three of the 10 days of walking involved going up and down mountains for up to 12 hours.

Mr Green said: “Typically, we would wake at 6am, breakfast on a big bowl of porridge and be on the way between 7am and 8am.

“The plan was to reach the camp by dark. There were no showers and the toilets were a hole in the ground.

“Some of the days the terrain was easier and the treks weren’t as long. Even Rebecca said that the trek was graded as ‘challenging’ whereas in fact it should have been ‘severe’, which is why we were so pleased with ourselves.

“There were stops on the way but only short ones. If you stop for too long you start to seize up. But there was a long lunch stop for a proper break.”

The group spent the majority of their nights under canvas but for a couple of nights they stayed at a small hotel.

Mr Green, who lost 3kg in weight on the trip, said: “It wasn’t all hard work. A couple of nights we were in a small hotel and we all found the nearest local restaurant with traditional dancing, which we took part in.

“It was all about moving your shoulders. That also included when you shook hands as you would hit shoulder to shoulder.”

The food was not great either. Mr Green said: “We did have goat on the trek but it was as tough as old boots. The meals were primarily vegetarian — lentils and pulses that were spiced and flatbreads.

Mr Green, who called the challenge “A Hill Too Far” in reference to the film A Bridge Too Far, is not too disappointed at not conquering the highest mountain.

“Because of the river fall, we had to reroute a different way and by the time we came to climbing the tallest mountain I and three or four others had just run out of steam.

“We would have had to start at 2am and walk in the dark to the base camp before we could face it. It was a hill too far and I am not Peter Pan.

“About eight did it and those were the younger and fitter ones. We stayed in camp for the day.”

After the final climb the walkers slowly made their way back down to the lowland areas.

Mr Green said: “I was not quite as fleet-footed as I would have been 20 years ago. On one day we had to descend 1,800m and the route was very narrow and rock-strewn so that required a tremendous amount of concentration. Jemal, who is much younger than me, fell.”

He said the Ethiopian landscape was some of the best he has seen and he enjoyed seeing fields of barley being tended to by locals.

“It was like a biblical scene,” he said. “They had oxen pulling wooden ploughs. It really was quite moving. It is difficult to describe the magic of the scenery and you were unable to walk and admire it, you could only do one or the other but we were very lucky with the weather, which was clear. “

Mr Green said while the country had begun to be developed, there was still tremendous poverty.

He said: “The people have tremendous faith, which is largely lost in our society these days and because of that one felt very comfortable. They were very welcoming. They asked us to go into their huts and they would make coffee for us.

“One of our party, a Dutch lady, is a doctor and when people knew this, crowds would come out of wherever they were because they thought that she would be able to cure anything, which presented a very difficult situation. It was very frustrating for her and for us.

“The guide was saying that the situation would be helped with education. But how could you tell these people to wash themselves properly when they could hardly get any water?”

Mr Green said the young people had a reasonable grasp of English and they kept asking for pens and books. All the boys loved football and would talk about Manchester United and Chelsea.

He said: “Some of us had brought pens to hand out but that was just a drop in the ocean. In one particular village we passed there was a school and it had one master. He told us how children from miles away would come to the school.

“When we got back to Addis Ababa we decided to club together and put about $300 towards pens and books for that school.”

Mr Green had been somehwat reluctant to go on the trip because it clashed with Henley’s Remembrance Day service but on November 11 he stopped the walkers so they could observe the two-minutes silence to remember the fallen.

He said: “I did have to explain the significance of the poppy and I gave the Kohima Epitaph and the exhortation and then I explained why I was doing the trek. It caused a conversation.”

After the trek he visited the Commonwealth war cemetery just outside Addis Ababa, where he laid a memorial cross on three graves and gave a salute to each one.

He also laid crosses on the graves of K Leek, of the Warwickshire regiment, as Mr Green had been stationed at Warwick, and F Glover, of the Coldstream Guards, due to its connection with Bix as the seat of the Alvingham family.

Mr Green said: “When I discovered that there was a war cemetery there I wanted to find out if there was anyone who I or the town had a connection with. I then asked the commission to see if they could get in touch with any relatives who might like to see my pictures.

“While I did not reach the highest mountain, my effort will result in funding for the Poppy Appeal, which is what it was all about.”