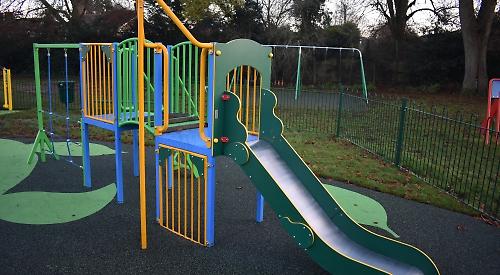 A CHILDREN’S play area in Henley has been officially unveiled following refurbishment.

The town council spent £70,000 on new equipment and resurfacing the playground at Freemans Meadow, off Fair Mile.

The work was carried out by contractor Wicksteed in the autumn and took about seven weeks.

The new equipment includes a roundabout that is accessible by disabled children and a pair of “talking” flower tubes designed to encourage social interaction between children, which are sponsored by Soha and Henley in Bloom.

New fencing around the playground provides a dog-free area where families can sit and watch children play or enjoy the meadow. A new swing set was installed earlier in the year.

Helen Gaynor, co-ordinator of the Friends of Freemans Meadow, which has been working with the council for about three years to improve the area, said: “I’m thrilled to bits, we’re all thrilled. It’s a lovely open space anyway — it’s kind of semi-rural.

“It was a bit shabby and unloved and there was some antisocial behaviour. We would visit with our dogs and think, ‘it looks sad and neglected’.

“We got together with councillors who were willing to invest in this area and help improve the facility but they wanted it to be what the residents wanted.”

Jill Buckett, who lives in Luker Avenue and is a member of the Friends group, said: “We desperately needed something much better for the children. There was just nothing here for them really.”

Mayor Ken Arlett said the new surface would last for many years.

He said: “It makes so much difference — it looks all clean and tidy. When I used to play football here 55 years ago all we had was an open area.”

Jackie Logan, resident engagement and community manager at Soha, said: “We are a community housing association with residents living in Henley and we want to support initiatives.”