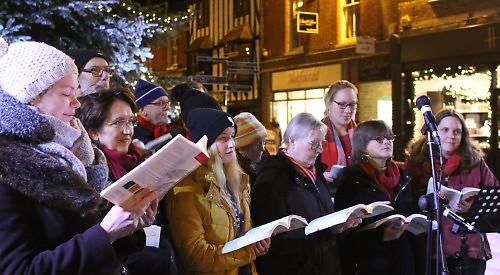 A GROUP of fathers from Sacred Heart Primary School were among the latest batch of performers at this year’s Henley Living Advent Calendar.

Their set included Hot Stuff by Donna Summer, Nine to Five by Dolly Parton and All I Want For Christmas Is You by Mariah Carey.

On Wednesday last week, the choir from Holy Trinity Church performed in the square, singing carols and giving Bible readings about the birth of Jesus.

The following night, the cast of the Kenton Theatre’s festive pantomime Sleeping Beauty gave a sneak preview of the show at the venue in New Street. They performed the opening scene and entertained guests with cheesy jokes.

The night raised almost £240, the highest total of any Living Advent Calendar performance at the cricket club since it began nine years ago. On Sunday night, a concert was held at Henley Baptist Church in Upper Market Place with traditional Christmas songs from France and Nepal. This also took a venue record of £160.25.

Richard Rodway, the calendar organiser, said: “It has been another fantastic week. We got off to a great start this year and that momentum has carried through. We’re pleased with the quality of the performances and the size of the audiences as well as their generosity.

“We’re on course for another successful year.”