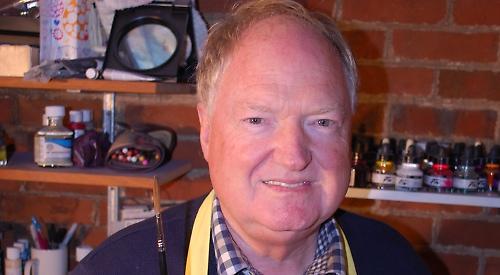 AN artist and entrepreneur has resurrected his plans to attach permanent lights to Henley Bridge.

Clive Hemsley, who was refused planning permission for the scheme in October, says he has found a new type of adhesive fixing which wouldn’t damage the stonework.

He has organised a public meeting next month to discuss his proposals and is urging both opponents and supporters to attend.

Mr Hemsley, who lives in Hart Street, Henley, says he is confident that the majority of the public still supports the idea and that others can be persuaded of the benefits following a minor change.

The meeting will be held at Henley town hall at 6.30pm on January 29 and will be chaired by Mayor Ken Arlett.

Mr Hemsley says officers at Oxfordshire County Council, which is responsible for the Grade I listed bridge, provisionally support the idea as long as the public and other officials are in favour. They say the lights and fixings would have to be approved by South Oxfordshire District Council and Wokingham Borough Council, the planning authorities governing the bridge.

There would also have to be widespread support for the general principle.

The borough council rejected Mr Hemsley’s first planning application for LED lights on both sides of the bridge, saying his suggestion to drill into the mortar surrounding the five arches posed “potential harm” to the structure.

It said his proposal didn’t give enough detail about the work to be carried out and there was no evidence that it would conserve or enhance the bridge’s architectural value.

Similar concerns were expressed by the district council, Historic England and the Henley Archaeological & Historical Group. After this, Mr Hemsley said he would scrap the project but now he has found a new type of adhesive fixing which requires no drilling and uses a glue which he says wouldn’t damage the stonework.

Last year, he attached two strings of temporary lights using a resin and the county council was able to remove them last month without causing any damage.

When Mr Hemsley was ordered to take down the lights last year, more than 2,000 residents signed a petition saying they should be allowed to remain.

“The town council has never said anything one way or another on the lights so I’d like them to chair the meeting because clearly I’m biased in favour of them.

“The new fixings I’ve found aren’t all that different but they use adhesive instead of tiny screws. They’re very nice and, frankly, you can’t get anything more gentle.

“Not everybody is in favour of the idea and people will be free to stand up and say it should stay the same but now they’re lighting up the bridges in the centre of London and you can’t stop progress.”

Councillor Arlett said he supported the principle of giving people a chance to express their views but wouldn’t give his own opinion as this could prevent him from doing so officially once a planning application is submitted.

A county council spokesman said: “Work is being done to establish the feasibility of reapplying for planning permission to install a permanent set of LED lights on Henley Bridge.

“This will be done in conjunction with multiple agencies and stakeholders.”

Henley Bridge was opened in 1786 and first designated in 1951 for its special architectural and historic interest.