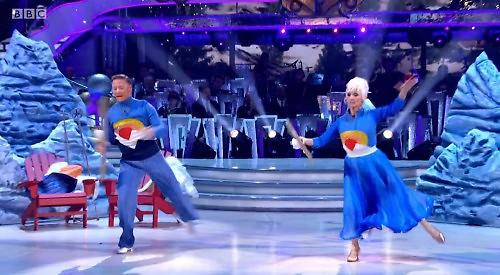 The radio presenter from Wargrave was crowned the winner of both a special festive edition of the BBC’s Strictly Come Dancing and a celebrity episode of Channel 4’s Come Dine With Me.

McGee, 61, narrowly missed out on the top spot of the dancing competition when she reached the final two years ago.

This time she and her dance partner Kevin Clifton, who were up against five other previous contestants, took home the trophy after dancing the quickstep to a jazzy arrangement of Jingle Bells.

McGee was lowered on to the stage in a ski-lift as Clifton “slept” in a chair wearing a ski visor and holding a magazine in his lap.

She shouted to wake him up and he removed the visor, revealing a fake tan line, before they launched into their routine.

Both wore matching blue jumpers showing the sun rising over mountains and carried snowboards covered in golden glitter, which they twirled before dancing together. The performance ended with Clifton twirling his partner and lifting her legs off the ground before she landed in the splits position.

Tonioli said: “My bells are still ringing and still singing! They’re going crazy for you, Debbie, and for a good reason — you really are a sparkler of the highest standard. The quality of this dance was top-notch at every level.”

Mabuse said: “I have so much respect for you — that was absolutely fantastic. If I had to speak about how brilliant that was, I’d be going until the New Year and nobody wants that.”

Revel Horwood said: “That was a class act — you always are, darling. You were light on your feet and I loved the leg lifts.”

Ballas said: “Everything’s been ticked off my Christmas list. What a way to end the show — you’re just perfection.”

McGee and Clifton, who hugged when the result was announced, were presented with a glittery trophy shaped like a Christmas star instead of the glitterball prize of the main show.

They then donned white costumes and joined their rivals Gemma Atkinson, Joe Sugg, Mark Wright and Richard Arnold in a closing routine set to White Christmas.

McGee was also reunited with Giovanni Pernice, who was her dance partner during the 2017 series. He burst out of a large Christmas present shouting “Debbie!” and the pair embraced excitedly.

Clifton told the show’s co-presenter Claudia Winkleman: “I asked him for advice on dancing with Debbie and he told me ‘with Debbie, you can do anything’.”

Before performing their routine at Leeds Castle in Kent, the pair visited a Christmas fair and McGee was filmed playing a snowboarding arcade game.

After she crashed into almost every tree, Clifton joked: “I hope our quickstep is smoother than this.”

McGee told viewers: “Performing on the earlier series was like being at a party for four months and I still get stopped every day by at least one person making a comment on my performance, which is amazing.

“I’d completely forgotten how hard it was and how much I eat when I’m doing this — it’s lovely to be back on the doughnuts! I really enjoyed it. Everybody did such great dances and I think we all had a brilliant time.”

She added that the experience of appearing on the show in 2017 “brought the sparkle back” into her life following the death of her husband, magician Paul Daniels, early in 2016.

Her victory comes less than a year after she underwent surgery to have two cancerous tumours removed from her left breast, which she believes was brought on by the stress of bereavement.

McGee told BBC Radio Wales: “It was lovely to go back into the glitterball of Strictly — it’s like entering a big bubble where nothing else exists in the world. You forget or black out everything else because otherwise you’d forget your steps. It’s like cramming for your exams but for months and then it finishes.”

She said she was proud to have inspired older women to lead active lives.

She told presenter Carol Vorderman: “Women often say I’m such an inspiration because they felt they were too old to do some things and now realise that isn’t the case.

“It helps that my parents never thought about age — Dad was still climbing up ladders in his eighties. We’d say, ‘you can’t do that’ and he’d reply, ‘I’ve been doing it all my life so why should I stop?’” McGee also won £1,000 after being judged to have hosted the best dinner party on Come Dine With Me, which she previously appeared on in 2010.

This time she was up against drag performer Courtney Act, reality TV star Charlotte Dawson, internet prankster Stevo the Madman and children’s presenters Dick and Dom, who came second. Each hosted a dinner at their home in the five days leading up to Christmas.

McGee threw a black-tie event, complete with a “royal butler” who previously worked for the Prince of Wales.

She served a three-course dinner of seasonal apple and mushroom soup, “Santa’s salmon” coated in breadcrumbs and sun-dried tomatoes and a pavlova.

She told her guests that the evening was called “Debbie Does Downton” and made a series of revelations about her private life.

When asked which celebrity she would like to kiss if she had the opportunity, she replied: “I would never be satisfied with just one.”

During a game of “true or false”, she revealed that she once waited for her husband in the bedroom while wearing a “Do not disturb” sign over her face and a “disturb” sign draped elsewhere. The group all correctly guessed this was true, prompting both raucous cheers and shock. Dominic “Dom” Wood, a former magician, told guests he had visited the house previously as a 15-year-old when Daniels invited him round to give him some advice.

He said: “I thought ‘who better to ask for help than the best magician in the world?’ so I sent him a handwritten letter and a few days later he phoned me at home.

“My mum said ‘there’s someone for you — he says he’s Paul Daniels’. I couldn’t believe it. He was such a strong and lovely character and it feels like there’s someone missing tonight.”

McGee said: “I love talking about Paul — it makes it feel like he’s still here. He would have loved it tonight and he’d have been doing tricks all night and telling jokes and stories.”

She concluded the night by performing a salsa routine inside a giant “snow globe” in her back garden with Graziano di Prima, another professional from Strictly Come Dancing.

Her guests jokingly awarded her “10 points” each and Dawson remarked: “Look at her pins — she’s all up in the air. She’s a real bendy Wendy, isn’t she?”

They awarded the evening 35 points out of a 40, while the others only scored in the twenties.