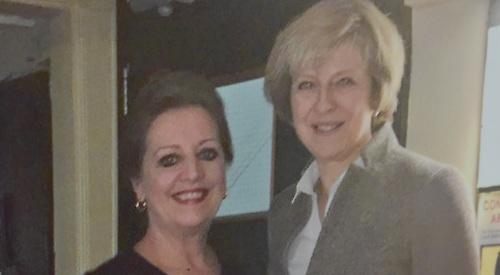 A PUB landlady has celebrated 40 years since she first arrived in Wargrave.

Jayne Worrall has been in charge of The Bull on and off for 21 years, but first came to the village on January 8 in 1980.

The 67-year-old has won several awards, including Pub of the Year in 2003, which she describes as one of the highlights of her time behind the bar.

She says she has always had a good relationship with Brakspear, the owner of the pub, and won an award for the Best Sunday Roast in November.

Miss Worrall, who lives at the pub, said: “It felt like home straight away. It is a very different village to the one I first came to, but it is still a great community.

“A lot of people have come and gone, but there is something about it that makes it so special to me, which is hard to explain.

“There are lots of people in Wargrave who are an integral part of my time in the village and I hope they continue to be a part of my life for many years, along with new faces coming behind them.”

Miss Worrall, a former airline stewardess for what is now known as British Airways, moved to Wargrave from Mortimer with her former partner and run the pub for four years.

She explained: “Forty years ago I was flying around and globe trotting rather than getting to know England.

“We applied for a different pub in Bix called The Fox, which is no longer there. We didn’t get it, but the person who was here before me did and so this place became available.

“I knew this was the place for me the first time I came here. Usually when you are taking over a pub, there is a big decision to make, but for me there was no decision.

“This pub has so much character and history. There was no family history of running pubs, but my partner at the time really wanted one and so I became involved.

“Forty years later I am still here and I have come back and forth like a boomerang. When the offer first came about, I hadn’t even heard of Wargave!”

She and her partner were also responsible for The Rising Sun in Witheridge Hill and decided to focus their efforts on the one pub.

She came back to Wargrave in 1998, having spent nearly a decade working in technical support and designing databases in the I.T industry.

Her second stint at The Bull lasted for 10 years. In 2008, she decided to buy a freehouse in Devon, but was compelled to return to Wargrave in 2013.

In 1981, she buried a time capsule at the pub, which included a bottle of ale, a photograph of her and her former partner and a copy of the Henley Standard.

The 15th century pub is featured in a number of books on haunted inns across the country.

Miss Worrall says she has heard the screams of a former landlady, who is rumoured to have been banished by her husband in the 1700s.

The pub has 10 members of staff and five double rooms. Until recently, it was referred to as The Bull Hotel, but Miss Worrall had to remove the large sign outside the building as it was frequently knocked down by passing lorries.

Despite being opposite another well-established pub in The Greyhound, Miss Worrall says business has remained strong, although she has been sad to see the demise of other familiar parts of the high street.

She added: “I have had three lives here, but I have always had a good relationship with Brakspear.

“It is a shame to see the way the village has changed. We hardly have any shops on the high street anymore. If you don’t use them, you will lose them.

“When you lose pubs, you lose communities. My family would religiously go to the pub on a Friday because we enjoyed it and we wanted to support our local pub.”

Miss Worrall says the pub is “unrecognisable” compared to when she first arrived in the Eighties, with a lot of changes to the interior. This has included exposing old beams and a fireplace, which have become part of the character of the The Bull.

Former Prime Minister Theresa May is a regular visitor and Stan Calendar, a local builder, has been frequenting the pub in the entire time Miss Worrall has been there.

Miss Worrall’s parents, Peter and Joyce, are no longer alive, but she has two brothers, Peter and Richard.

She hopes to visit Peter in Spain at some point this year, having not had a holiday since 2003.

When she won Pub of the Year, she received a prize of a trip to Athens, but exchanged it for a holiday to Cornwall with her mother.

She added: “Anybody who has a pub will know it is not just a job, it is a way of life. I believe unless you really enjoy it then you should get out because it is all consuming.

“It is not Monday to Friday 9-5. Fortunately, I have great staff and I couldn’t do it without them.”

Tom Davies, Brakspear chief executive, said: “Congratulations to Jayne on this very impressive service milestone.  We are proud of the number of long-serving landlords and landladies running pubs with us, and value them as tremendous assets to our business and to the communities they serve.

“Jayne has been an exemplary landlady over the years, running a fantastic pub that is loved, as she is, by many loyal customers in Wargrave and beyond.   Far from resting on her laurels, she is always pushing to achieve more, and just a couple of months ago won the Brakspear Best Sunday Lunch award for her legendary home-cooked roasts.

“We’re delighted that Jayne shows no sign of leaving the Bull, or even slowing down, and look forward to many more years with her as a treasured member of the Brakspear family.”