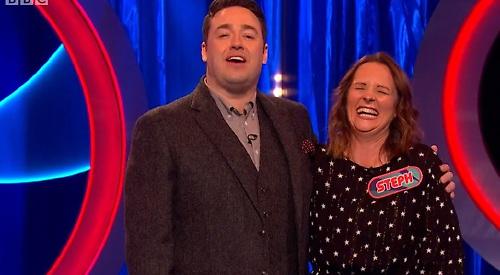 A DANCE teacher plans to take her family on holiday to New York after winning more than £6,000 on a new television game show.

Steph Maxwell, of Newtown Gardens, Henley, appeared on the first episode of First & Last, which was shown on BBC 1 on Saturday evening.

She was one of 11 contestants to face a series of challenges, where the aim was not to have the best or worst answer.

In the final round, she was asked by host Jason Manford how much money she wanted to win between £1 and £10,000.

She celebrated in front of a studio audience and told Manford she would book the holiday straight away.

Mrs Maxwell, 41, said: “It is a brand new show but I think it is a brilliant concept. I have always loved quizzes and I thought it would be fun to have a go.

“There was no general knowledge but you just have to make sure you are somewhere in the middle at the end of each round and I managed to survive.

“For the final round, I went into a sound-proof room and had headphones on. I was the second person to give my number and I thought I had gone too high.”

On Saturday, she invited about 20 friends to her house to watch the episode as only she and her husband Paul knew the outcome. Not even their daughters Charlotte and Holly knew.

Mrs Maxwell said: “When they revealed the final number, my children started screaming and running around the house.”

Mrs Maxwell said: “I got an email from them recently to say we were going to be the first ones. They were making six episodes and they wanted to start with a bang, so they went with the most exciting one.

“Jason was such a genuinely lovely and funny man and he came up to me afterwards to congratulate me.”

Mrs Maxwell, who has lived in Henley for 15 years, founded the Divas and Dudes Dance Academy 11 years ago. She now teaches around 120 children from ages three to 16 and also visits local nurseries and pre-schools to deliver dance and music sessions.

Appearing on a game show was the final wish on Mrs Maxwell’s 40th birthday bucket list.

Other wishes included completing the London Marathon, travelling to Venice and performing in a stage show.

Her husband surprised her with the trip to Italy in February 2018 by waiting until they arrived at the airport to tell her they were going to Venice. The couple went to see the opera and took a gondola ride while there.

Two months later, Mrs Maxwell completed the London Marathon in five hours and two minutes and raised £2,600 for the British Lung Foundation as her father Charles Kent died in 2016 with a lung condition. She had never run further than 10km before she started training.

In November 2018, she performed in A Chorus Line with the Henley Amateur Operatic and Dramatic Society.

She said: “They were looking for characters and I have always been quite a bubbly person, so that wasn’t a problem for me.

“It was quite a quick process. I had to have a Skype interview where they ask you lots of questions.”

During the first round, all the contestants were inside cardboard boxes and had to choose a time to jump out. They were made to wear headphones and there was a camera in each box to ensure there was no cheating.

She was the seventh person to reveal herself and let out a loud cheer when she realised she was through to the next round.

For the next game, the remaining nine players had to write an Instagram hashtag on a whiteboard and Mrs Maxwell picked “#fabulous” as it is a word she uses almost daily.

Mrs Maxwell, who used to work as a stewardess for Virgin, told a funny story to Manford as she waited to find out how many hits her word had.

She said she and her colleagues would hide milk pots around the aircraft while passengers were asleep. Her word had nine million hits, while another contestant said “#Friday”, which had 70 million hits.

For round three, each contestant was asked to bring a potato to the studio, and they were ordered from lightest to heaviest.

In the next game, seven people who have completed the London Marathon wearing fancy dress came on the stage and each contestant had to pick one based on how long it took them to cross the finish line.

Mrs Maxwell selected a woman wearing a tree costume, who finished the race in six hours and 43 minutes.

In the penultimate round, each contestant chose a member of the audience based on their age and she chose a man who was the same age as her.

The final round was called “Size of the Prize”.

When she found out she had won, she said: “Hashtag fabulous!”

Mrs Maxwell said it felt “amazing” to win. “You have got to go out and enjoy life and grab it with both hands,” she said.

“I have always been positive and energetic. People around here might think I am a bit crazy but my explanation is that you are only here once and it is all about having fun.

“Nobody knows how long you have. My dad died when he was only 65.”