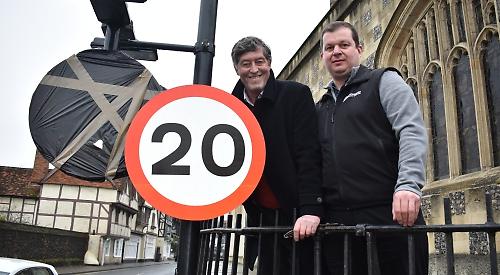 A NEW 20mph speed limit will be introduced in Henley next Friday.

It will apply to all streets in the town centre, which currently have a 30mph limit, plus King’s Road, Hop Gardens, Deanfield Avenue, Gravel Hill and parts of Reading Road, Greys Road and Northfield End.

The move is designed to make Henley safer for pedestrians and reduce pollution by keeping traffic flowing.

The zone, along with a newly implemented 40mph zone on Fair Mile, will cost £35,000, which includes new illuminated signs at the entrances to the town as well as repeater signs on minor roads at 50-yard intervals.

Signway Supplies, of Basingstoke, began to install about 100 signs  on Monday.

Most of the signs will be fitted on to existing street furniture but the illuminated signs at the entrances to the zone will be mounted on new poles.

Circular 20mph signs will be painted on the road at the entrances to the zone.

Councillor Stefan Gawysiak, a town councillor who also represents Henley on Oxfordshire County Council, the highways authority, said: “When I became county councillor I was determined to make Henley a safer place for pedestrians.

“This 20mph zone is for safety reasons, so if there are slower cars then people — shoppers, residents and tourists — feel more comfortable walking around town. That will also improve air quality.

“I think drivers should be aware there are pedestrians about and slow down. Cars travelling at 30mph through Duke Street, Bell Street and Reading Road, I don’t think is acceptable. People should be able to cross the road without cars coming towards them at 30mph.”

The county council agreed the change in September 2018 but there have been numerous delays in implementing the new zone because of the cost.

Cllr Gawysiak said he was delighted to see it finally happen, adding: “It just means that Henley will become a much more pleasant place to walk around.”