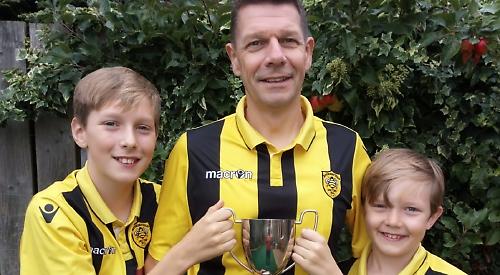 A TEACHER from Sonning Common completed 12 half marathons to raise money for his sons’ football club.

Paul Hodges, 51, took part in a different race each month last year in support of Rotherfield United in Gallowstree Common.

He raised £750 for the club’s benevolent fund, which helps children to still play when their parents cannot afford membership.

Mr Hodges pays about £200 for his sons Freddie, 12, and George, nine, to train and play matches at the club’s ground in Horsepond Road.

The money he raised will enable about seven youngsters to join the club.

Mr Hodges, who lives in Blounts Court Road with his wife Wendy, 50, and their boys, ran the first of his half marathons in Farnborough in January last year.

This was followed by monthly races in Wokingham, Reading. Boston, Bracknell, Hull, Bath, the Isle of Wight, Bristol, Henley, Marlow and Silverstone.

In the first five events he finished in one hour and 43 minutes, except Wokingham, where he was two minutes faster. However, he was suffering with flu when he ran in Hull in June and finished in two hours and two minutes.

He was still recovering from the virus when he took part in a 16-mile cross country trail run in Bath in July and took more than three hours.

He was also behind his best time in the next four races but recorded another time of one hour and 43 minutes in the final run at the race track in Northamptonshire last month.

Mr Hodges said the penultimate race was the hardest. “Marlow was really hard,” he said. “It was so hilly and it is billed as one of the hardest half marathons in the UK.

“Silverstone was easier. There was a great atmosphere and we could have a look at the garages.

“It was really smooth on the track and I was hoping it would be my fastest one but I picked up this knee injury so wasn’t able to achieve my personal best. I was relieved to have finished.

“I loved it and was pleased that I managed to do what I set out to do. It’s so easy to break a New Year’s resolution and 12 months is quite a long time to actually do something like that. It’s not just giving up drink for a month.

“I was pleased I committed to it and was able to do it. I’m going to keep running until I beat my best time and choose really flat runs. I would really like to take on some longer distances too.”

He ranone hour and 44 minutes in the Farnborough half marathon on Sunday and is also considering running a full marathon in the spring or summer in aid of the Campaign Against Living Miserably, a suicide prevention charity.

Mr Hodges feels better for all the exercise.

He said: “It has had a lot of benefits. It’s very good for your mental health. You can zone out when you are running and think about a lot of things.  You can sort your to-do list and things like that. I no longer feel daunted by the distance but I have to keep my level of training going.” He said he was grateful for all the donations he had received and the support of colleagues at LVS Ascot, the independent school where he is deputy headteacher.

Mr Hodges said: “I had great support throughout the year. A lot of my colleagues sponsored me.”

The club honoured him by presenting him with its Clubman of the Year award in July. He and his family went to the Tandoori Connoisseur in Wood Lane, Sonning Common, to celebrate.

Mr Hodges said: “I was very humbled to receive it because I’m sure there are lots of other people who spend lots of time raising money for the club. I got great support from them throughout the year and they were very proud.”

• Rotherfield United Football Club is recruiting more players for its under-five and under-six teams. Training sessions take place from 9.30am every Sunday. Girls and boys are welcome and must bring boots, shin pads and water. For more information, email Andy Tidswell at andytidswell@gmail.com