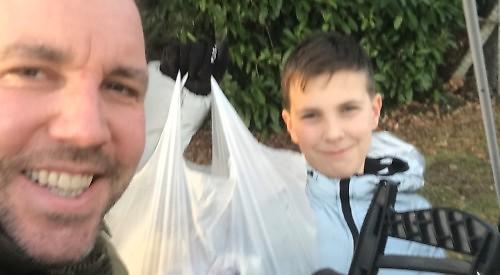 He also cleared the pitches at Bishopswood Sports Ground in Gallowstree Common, where he plays football for Rotherfield United.

He picked up broken glass, cigarette butts, coffee cups and crisp packets, among other items, and at the football pitches collected a lot of discarded tape used by players to hold their shin pads in place.

Daniel, who lives in Wood Lane with his parents Matt, 45, Nicola, 43, and sister Neve, 12, volunteered to do the work as part of his bronze Duke of Edinburgh’s Award as it fulfilled one of the requirements. His father accompanied him to provide support.

Daniel, a pupil at Gillotts School in Henley, said: “First of all it was a bit boring but then it was actually quite fun because of how much we picked up. We saw a lot of glass, which is quite weird. On one road there was tons of it.

“The worst bit was picking up the cigarettes because it was so annoying trying to pick them off the ground.

“It was good putting the full bags in the bins because we knew we had done a good job. We were quite proud. It made me feel quite sad because of how much litter there was. People just chuck it on to the floor because they’re not near a bin. I think they should be more aware so animals are not hurt and it doesn’t go down to the sea and kill other animals.”

Mr Beech, a chartered surveyor, who coaches his son’s football team, the Wasps, said a number of the other players were also completing D of E awards.

He said: “A lot of them are finding it difficult to get voluntary work. Daniel just took it upon himself to do some volunteering on his own.

“I feel really proud of him and was chuffed with how he took pride in what he was doing. It has kind of changed his mindset. Now when he sees rubbish he notices it and shakes his head. He’s certainly more aware of it.

“He got some satisfaction out of it and it didn’t feel like a chore. I think he felt he was getting out and doing a good thing.

“He has got helping people in his nature and he felt really good about himself for doing something to help the community.”

Mr Beech said he might ask the other boys in the football team to take part in litter-picks on a regular basis and they will spend a few hours tidying up the sports ground in Horsepond Road next month.

“We might keep going with it and make it a regular thing,” he said. “If you can take some pride in doing a bit of litter-picking on a Sunday then that’s better than staying and playing PlayStation all day.

“We’ve got 30 kids at Rotherfield United who could easily do something once a month or once every other month. The parents are very keen to be involved as well, supervising or providing refreshments.”