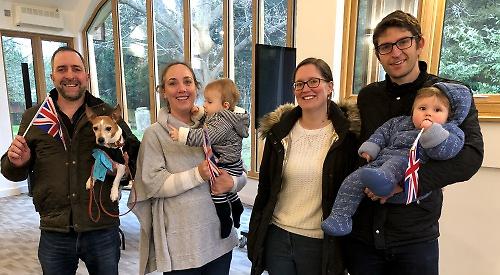 MORE than 1,000 tickets have been sold for a street party in Wargrave to mark the 75th anniversary of VE Day.

The celebration will take place on Mill Green from 12.30pm to 4pm on Friday, May 8, the day the Second World War ended as Germany surrendered.

Residents queued up at St Mary’s Church to buy tickets for the event on Saturday, January 25. Some arrived at 7.30am to be first in line when the “box office” opened at 9am.

Lay minister Andy Ferguson, who is helping to organise the party, opened the doors early so that people didn’t have to stand out in the cold.

Tea, coffee and bacon rolls were served throughout the morning and the first 100 people to buy tickets received a complimentary Union flag to wave.

A total of 1,083 tickets were sold during the day, which means the event is almost sold out. Organisers had planned to stop selling at 1,104 tickets but are now considering increasing the capacity to 1,200.

Shirley Collie, who chairs the event committee, said: “We were thrilled with the response and grateful to everyone that took precious time out of their weekend to queue for tickets.

“Thank you to everyone for making the morning a great success and thank you to the ladies that organised tea and coffee.”

The VE Day festival will follow a tried and tested format, with rows of tables and a range of activities for children and families to enjoy. People are encouraged to bring their own picnic.

There will be prizes for the best decorated table and the best Forties fancy dress. The event is being supported by the Wargrave Festival, St Mary’s Church and the Robert Piggott Junior and Infant Schools’ parent-teacher associations.

Tickets cost £5 for adults and £3 for children. If you would like buy tickets, email tickets@pursuitnha.com