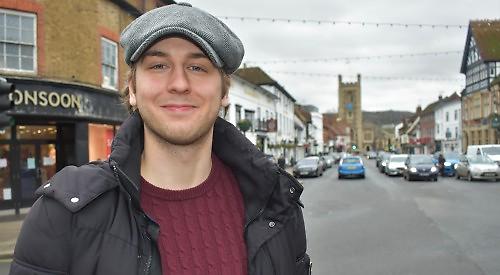 A WEST End actor has moved to Henley after falling in love with the town while starring in the festive pantomime in 2018.

Sam Peggs, who recently joined the cast of Les Misérables at the Sondheim Theatre in London, was so enamoured when he played the lead in Dick Whittington at the Kenton Theatre that he resolved to live here.

Now he and his partner Courtney Hows have made that a reality after realising that Henley is halfway between the capital, where they were living, and Swindon, where she works as a children’s gymnastics teacher.

The couple live in a flat above the shops in Hart Street and Mr Peggs works from home as a singing tutor in his spare time.

He is currently a “swing” in the long-running West End musical, which means he understudies for 11 of the leading male roles and must be able to step into any of them at the last minute in case of illness or injury.

Mr Peggs is also assistant to the show’s choreographer and must help with any problems involving props or stage direction.

The 23-year-old grew up in Basingstoke and left school at 16 to complete both his sixth-form and undergraduate studies at the Arts Educational School in Chiswick, where he met Miss Hows. Soon after graduating, he landed his first major role as Hog Eye, a Hollywood stage electrician, in a British and European theatrical tour of Sunset Boulevard which ended in April 2018.

He then successfully auditioned with Immersion Theatre for the part in Dick Whittington, which sold a record 4,400 tickets during its 24-night run at the New Street theatre.

Mr Peggs said: “I was still living in West London when I did Dick Whittington and realised that even though it was exhausting, as pantomime schedules generally are, I was still able to commute back home each night without being too tired the next morning.

“I love the capital but wanted to live somewhere more relaxed and Henley seemed perfect.

“I absolutely loved my time here — it was much cleaner and quieter and at first I found it weird that people would actually smile at me in the street.

“It’s nothing like the bustle of Oxford Street and I was lucky to work at such a picturesque venue that’s practically on the riverside.

“I’ve always loved doing smaller productions, not least because you can play a much bigger part which is a good credit for the CV when you’re starting your career.

“I was worried because I thought Henley audiences would be conservative and fairly quiet but they really got into the spirit.

“You could tell this was an important community event which they’d been looking forward to all year and I felt proud to be a part of that.

“I definitely needed to rest when it was over but I felt very well acquainted with Henley and told myself it was goodbye, but not forever.

“Courtney loved it when I showed her round so moving felt like the obvious choice.

“I know Henley isn’t a cheap place to live but it’s nowhere near as bad as London, where it is absolutely ridiculous.”

Mr Peggs had auditioned for Les Misérables unsuccessfully several times before reapplying last summer and then getting through four rounds of weekly auditions.

He must be available for daily performances six days a week and typically appears in more than half of these because he covers for the main cast’s holidays under his year-long contract.

When he isn’t needed, he sings in the chorus from the wings.

Mr Peggs said: “I’ve only played three different characters so far but I’m only a few months into the contract and I’ll get to do more over time, especially once people start going on holiday.

“It’s a dream come true because Les Mis was ‘the’ show I wanted to be in when I was younger. I saw it in London when I was 14 and thought ‘this is everything I want to be’ — the big numbers and epic score had me in floods of tears.

“The reality hasn’t disappointed one bit. The cast are great and the audience love it. The shows are usually sold out and we get standing ovations.

“It’s physically exhausting because every night you’re screaming and shouting as if you’re going to war in real life but the more you do it the fitter you get.

“My dream role would be Thénardier, who sings Master of the House, because he’s quite a funny character but he’s in his forties or fifties so I’ll have to bide my time.

“It’s an absolute classic and I’m very lucky to have done such big productions so soon after leaving drama school. There are lots of shows out there but scores like Sunset Boulevard and Les Misérables are just a different breed.”

Mr Peggs, who also plays the piano, teaches singing before his evening shows on Mondays, Tuesdays, Thursdays and Fridays. He can’t do it on Wednesdays and Saturdays, when there are matinées, and he rests on Sundays.

He said: “It’s more of a hobby than anything else — I like the idea of passing my knowledge on and now is a good time to start doing it. I’ve already had a few messages of interest on Facebook.

“Now that I’m working in the West End, I suppose my main goal is simply to stay there because it’s the best job in the world for an actor. It’s certainly the best money and working conditions.

“I have some fairly romantic ideas about the Kenton. It’s such a cute little theatre with a lot of history and I’d love to be involved in some capacity.

“I had hoped to do another pantomime but now that Immersion isn’t producing it I suppose I’d have to write and direct my own.

“If the Kenton isn’t hosting stand-up comedy it’s usually either amateur drama or very short-run shows but I’d love to stage a longer professional production there. That would be a long way off though, after I’ve settled down.”