Church tribute to martyr with play about his murder 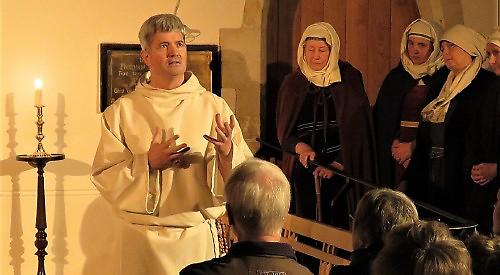 A PLAY depicting the murder of St Thomas Becket was staged at the Anglican church in Goring which bears his name.

A cast of 17 worshippers performed T S Eliot’s 1935 poetic drama Murder in the Cathedral, which chronicles his final days before he was martyred at Canterbury on December 29, 1170.

The lead role was played by Simon Merritt, who portrayed St Thomas as he came to terms with his impending death at the hands of Henry II’s knights, played by his son Tim and fellow cast members Phil Bates, Robert Howard and Ian Paddick.

The production was narrated by a Greek-style chorus who depicted his inner conflict, and began with a talk by the vicar the Rev Ben Phillips encouraging the audience to consider the link between the church and politics.

The play ran for three nights, two of which were sold out.

It was directed by Caroline Wardle, of Elvendon Road, who has previously directed for the Goring Gap Players but was doing it again for the first time in about 20 years.

The cast said they enjoyed the experience so much that they may stage more shows in future.

Mrs Wardle said: “It went incredibly well — people said they enjoyed it and I liked getting back into directing, even if it was exhausting. We were starting from scratch and some of the cast hadn’t acted before or were very busy with family life but we did ourselves proud.

“There’s a lot of enthusiasm for continuing our group and I imagine we’ll do something again, although nothing is decided for certain.”

The play was the first in a year-long series of events to mark the 900th anniversary of St Thomas’s birth, the 850th of his death and the 800th of the establishment of a dedicated shrine in his name at Canterbury Cathedral.

The next event is a pilgrimage to Christ Church Cathedral in Oxford, where a stained glass window depicts scenes from his life, which sets off next Friday with a minibus leaving from Goring station at 2.30pm. Tickets cost £15 or £6 for those making their own way.

Other events include a discussion with the Bishop of Oxford on June 20, two commemorative services and a family feast on July 5, a coach trip to Canterbury on October 31 and a joint performance by the Goring Gap Players and Goring Chamber Choir on November 14.

St Thomas came into conflict with the King when the latter proposed a constitution which would have weakened the clergy’s independence. He was exiled for a time and assassinated on his return by four knights who believed the monarch had ordered his death.