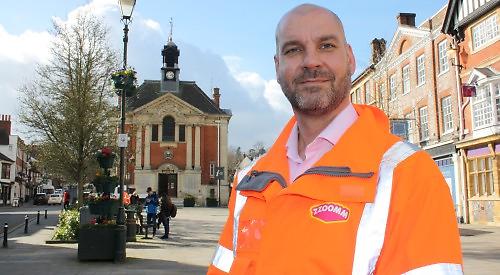 RETAILERS in Henley have slammed a company which is to close two town centre streets in early summer.

They are furious that they weren’t consulted about more than three months of work, which began on Monday.

One has even threatened to take legal action against Zzoomm, saying he will lose trade at a crucial period.

Duke Street will be shut from May 25 to 29 and the southern half of Bell Street from May 11 to 22 while the company lays a new high-speed internet cable network.

It has shortened the Duke Street closure, which was going to last until June 8, following the outcry from business owners during a heated meeting at the town hall on Wednesday last week.

Traders said the work would affect footfall during one of their busiest periods when they were already struggling due to online competition and high rents and business rates.

Zzoomm liaised with both Henley Town Council and Oxfordshire County Council, the highways authority, before setting the dates and agreed not to work during late June and July, when thousands of tourists visit for the royal regatta, Henley Festival and Thames Traditional Boat Festival.

But retailers said May and early June were also peak times, which they would have explained to Zzoomm had they been consulted.

The company, which has been working in residential areas since September, and town councillors said they hadn’t realised the importance of this period to trade.

Laurence Morris, who owns Laurence Menswear in Duke Street, told the meeting that the town centre work should have been tackled first.

He said: “I’m not against progress but the timing is very concerning.

“If you guys had done your homework, you’d know we’re fighting for every possible bit of business as a tourist town.

“So why the bloody hell is this work being done at peak tourist time, when you could have planned it for January and February instead of wasting those months with the residential streets? How flexible are you with these dates because if you’re going to try this in May you’ll have a fight on your hands. If I have to get a court injunction to stop it, I will because I can’t afford to lose business.

“You’re a private company and are effectively asking smaller traders to support you and your business model. We’ll have no choice but to lose trade while in a few years you’ll be lapping it up in an overseas villa. You’re not doing this for peanuts.”

Jason Acock, of Henley Cycles, also in Duke Street, said: “When you sat down to plan all those weeks or months ago, someone should have flagged this up and I’m really flabbergasted that nobody did.

“Footfall is three times greater between May and July.

“I’ve got customers coming over from the States and all over Europe for the regatta because there’s all the training sessions.

“You must have known that and you’re not selling it to me if you say you didn’t. You should have seen this coming. It’s not rocket science — it’s a massive train coming down the track with its light on. You could have applied for the closures in October last year and got it done after Christmas. It would be finished by now. It’s ironic that you’re going to be the fastest provider in the country but we haven’t got a leaflet explaining what’s going on.”

Dave Thrower, Zzoomm’s regional manager, said: “We weren’t aware of these concerns and thought we were doing the right thing by going in May and avoiding June and July.

“The work will be quick — down one side of the street then the other, then back to normal. We’ll work any reasonable hours that are required to get it done as quickly as possible.”

He said the closures would probably be shorter than advertised but it had to apply in either three- or 10-day blocks to meet the county council’s policy and three might not be enough.

He said pedestrian access would be open at all times and barriers would be immediately removed on request for delivery and emergency vehicles.

Work wouldn’t take place along a whole street at once and instead crews would do it section by section and would only be outside each shop for a matter of hours. A clean-up team would replace the York stone paving straight away so there was no wait for resurfacing.

The company must give at least 12 weeks’ notice before closing roads so the work can’t be brought forward.

Zzoomm, which has an office at the Hub in Station Road, will circulate a leaflet confirming the closure dates.

Mr Thrower said: “We know what we do is disruptive but we try to do things a bit differently. We’re not a big national operator — we’re only round the corner and you can always come to see us with any concerns.”

Stefan Gawrysiak, a town and county councillor, said: “I honestly thought that June, July and August were the busy months to avoid. We’ve heard loud and clear that you'll need us to let you know exactly how and when any disruption will happen. A road ‘closure’ isn’t a complete closure, just a restriction on through traffic and Henley will still be very much open for business.”

He said that businesses would benefit in the long run because some already had difficulty processing card payments due to slow internet speeds.

Over the coming months, Zzoomm will also be working in Thames Side, Hart Street, Riverside, Station Road, Queen Street and Reading Road, where it will install the last of three new exchange cabinets.

There will be lane closures in Thames Side and part of Station Road while parking bays, bus stops and taxi ranks will be suspended.

A Zzoomm spokesman said: “Part of Zzoomm’s brand is to always be as open and collaborative as possible and taking these comments into account has allowed us to refocus our build date, especially regarding Duke Street, and move ahead with revised plans that we believe will support retail needs while allowing us to complete this part of the network.

“It also highlighted the passion that Henley’s retail outlets have for their town, a passion we share in our mission to provide Henley with the fastest broadband connection in the UK.”