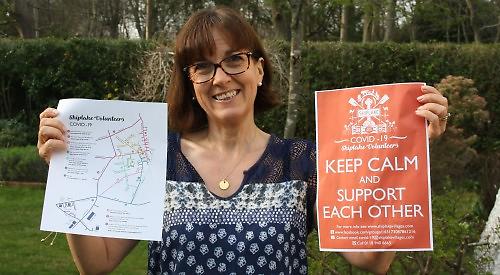 RESIDENTS of Shiplake have united to support their elderly and vulnerable neighbours during the coronavirus pandemic.

More than 100 volunteers have joined the village’s mutual aid group, which was formed by Kate Oldridge, of New Road, and parish councillor Joanne Stone.

The pair have split Lower Shiplake and Shiplake Cross into 10 separate areas, each with its own

co-ordinator who is responsible for recruiting and supervising volunteers from their own neighbourhood.

The co-ordinators, who include parish council chairman Fred Maroudas, circulate their mobile phone numbers and people who need help with tasks such as shopping or collecting prescriptions, or are simply lonely and in need of emotional support, can call them.

They then assign a volunteer to assist that person through a specially-created chat group on the WhatsApp mobile app.

The group, which covers about 630 households and more than 2,000 villagers, also has a Facebook page where it shares the latest government advice and information about shops and services.

It will consider any reasonable request but prioritises calls from four groups of people:

• NHS and other key workers living alone or where both members of a couple are key workers.

• Those who are self-isolating because they or a member of their household has symptoms of covid-19.

• Those who have received a letter from the Government instructing them to self-isolate due to a medical condition.

• Those who believe they should have had a letter as they have a condition which puts them at greater risk.

Mrs Oldridge and Cllr Stone came up with the idea after Carol and Mark Harvey, who run the village stores in Station Road, began collecting names of vulnerable villagers and offered goods deliveries.

They had built up a team of more than 35 helpers by the time the Prime Minister imposed a national lockdown and shortly afterwards the pair took over and continued to expand the scheme.

Villager Kate Parsons, a designer, drew up a map showing the 10 areas and the phone numbers of each
co-ordinator which has been widely circulated and put up on noticeboards.

She also drew up a logo incorporating various village landmarks such as the post office and a pair of crossed rowing blades with the slogan “Keep calm and support each other”.

These have also been pinned around the village and residents are being encouraged to print them off and stick them in their front windows.

Mrs Oldridge, a trained lawyer who now works as an executive coach, said: “Carol and Mark made a brilliant start and we wanted to shape it into something that didn’t just depend on a single person because if they became ill it could all stop working.

“We’re a large village so we needed that formal structure as they’ve done in Henley.

“We’ve appointed deputies to make sure it keeps going even if area leaders become sick.

“When we had a large number of volunteers we called each of them to explain our plan and allocate them an area. We then set up the neighbourhood WhatsApp networks so the entire group wasn’t bombarded with messages.

“We’ve had an amazing response, including from those who are over 70 and self-isolating. We didn’t think they’d be able to help but they can still phone people who might be feeling lonely or cut off.

“It has been very much a team effort, from the volunteers on the ground to the lady who does our admin and makes sure we’re observing data protection law.

“I’m not doing any shopping myself but everyone’s making sure to take the right precautions.

“There’s a tremendous sense of solidarity and it has really brought people together. When I go out to walk the dog, I find I keep bumping into people who I’ve met through the group.

“I moved here in 2010 and the other day I met a lady who lives a few doors down from me for the first time. We didn’t know each other until we ended up speaking on the phone.”

Cllr Stone said: “We’re delighted with the number of people in the village who have come forward and thankful to live in a community where people want to help. Carol started this but obviously it’s quite a challenge to manage while running a busy shop and post office.

“I’m very enthusiastic about it because there are many older villagers who may be living away from their nearest relatives but haven’t got internet access.

“They’re used to looking after themselves but it can be a struggle if they don’t have access to mobile apps which could help them.

“The parish council is 100 per cent behind this and we’re thankful to Kate, who has been brilliant and a marvel of energy.”

The Harveys are still delivering goods and have just launched a fruit and vegetable box scheme. Shiplake Butchers and Binfield Heath village stores are also delivering.

Debbie Sayer, the area co-ordinator for Lower Shiplake centre, said most requests were for shopping and prescription collections.

She said: “I’m a reflexologist working from home and had to stop that reasonably early on so I was very happy to redirect my time into something useful and to do something positive.

“My part of the village has been relatively quiet but elsewhere there are quite a few people who are either sheltering or self-isolating and don’t have friends or family close by.

“It has gone really well so far — I’ve met loads of people who I never even knew before and we’re working really well together. So many people have been in touch to ask if they can help.”