Singer performs in street at Clap for Carers evening 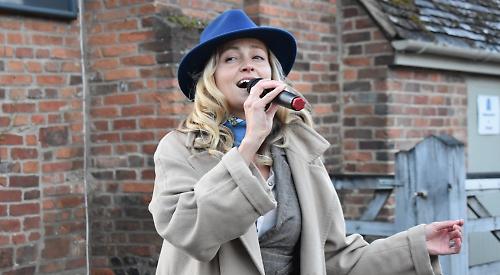 A SINGER songwriter from Nettlebed performed in the village high street to honour NHS staff and carers working during the coronavirus pandemic.

Fellow villagers lining the street for the applause watched and listened and some hummed along.

Beforehand an ambulance drove along the street and the driver beeped the horn, which was greeted by a cheer from the residents.

Katie Sheehan, who lives in High Street with her husband Sean, said: “We’ve been coming out since the first time. The carers are just doing an amazing job in looking after everyone. It’s nice just to support them and it’s brilliant to see more and more people every week.”

Kat Cornfield, of The Ridgeway, was joined by her children, Chloe, nine, and Reuben, three.

She said: “We just wanted to show our appreciation to everybody in the NHS and everyone else — the delivery drivers, care workers, everybody.”

Michael Butler, who also lives in High Street, was joined outside by his wife Jodi and said: “We’re here for the same reason as everybody else really — to give a bit of support. It’s nice to see everyone from a distance.” Jack Templer, nine, and Connor Blyth, nine, who both live in the village, were out too.

Jack said: “I have come out for the NHS and for Colonel Tom. It’s quite extraordinary.”

Connor added: “I wanted to clap for all the people in the NHS who have helped people with coronavirus.”

The former soldier became the subject of national attention when he walked 100 lengths of his garden to raise money for the NHS. He has now received more than £32million in donations via a JustGiving page. Miss Poole said: “He’s a wonderful inspiration to all of us.

“I also think it’s wonderful for us to thank our National Health Service and all the key workers and I feel very passionately about that.

“This is the biggest gathering I’ve seen in a long time — I almost feel a bit guilty — but it’s nice to be able to connect with people from afar and celebrate our national heroes.”

The singer is putting together a charity single to raise money for the NHS. It is called This is the Song, which she wrote eight ywars ago and is based on Dame Vera’s classic anthem.