Army cadet offers lesson in how to make bunting 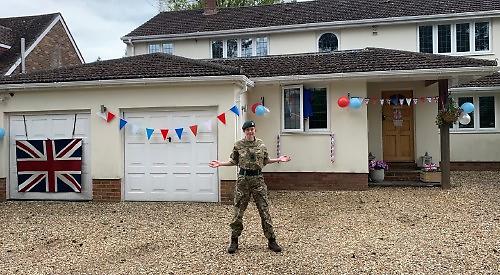 AN army cadet from Shiplake made a video to show people how to decorate their home for VE Day.

Colour sergeant Ashleigh Poolan, 16, made the film at the request of her Henley detachment commander Melissa Haynes and it had more than 1,000 views on the Oxfordshire Army Cadet Force’s Facebook page.

In it, she talked about the history of VE Day and the defeat of Nazi Germany before demonstrating how to make bunting and paper chains with red, white and blue paper.

Ashleigh, who was dressed in her multi-terrain pattern uniform and beret, also encouraged people to make their own Union flags, posters, leaflets and banners.

She said: “We wanted to support the Royal British Legion, which had the initial idea of getting the community in Henley decorating houses.

“We decided it would be beneficial to make this video because it’s important during these unprecedented times that we don’t forget.”

She made the film at home where she lives with her parents Katharine and Martin and brother Jackson, 17. She also attached a Union flag rug to their garage door.

Ashleigh said: “It was nice to know that people were actually getting involved with this important event. I thought they would forget about it because of the coronavirus.”

Meanwhile, pupils in years 7 and 9 at Shiplake College made bunting to mark VE Day and the independent school held an online assembly to mark the occasion.