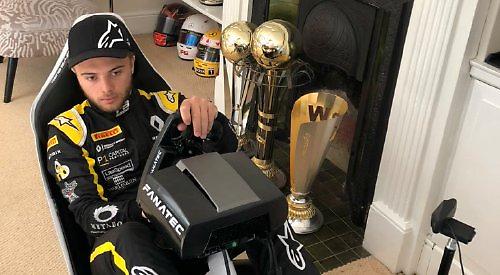 A RACING driver from Shiplake teamed up with golfer Ian Poulter to take part in his first virtual Formula One event.

Max Fewtrell partnered with the Ryder Cup winner as they represented Renault at the Virtual Spanish Grand Prix on May 10.

The races have been taking place every month since the end of March, as F1 bosses continue to debate how they might reintroduce the sport safely in the wake of coronavirus.

He said: “I am a junior driver for Renault as part of their academy and they give us access to the F1 simulator and they help young people to move through the ranks.

“A member of their marketing team approached me and said they wanted me to do the virtual Grand Prix and it went from there.

“It was really cool getting to race against the other drivers. I only got told a week before and I had the game three days before the actual race, so I didn’t get a lot of time to practice. For us drivers we are quite lucky to be able to replicate our sport and still get the feel of the wheel.”

He took part using the official F1 video game, which he played through the PC with a steering wheel and paddles to change gears. He wore his Renault racing uniform and had the ability to use foot pedals during the race.

It is a circuit that holds fond memories for Fewtrell, 20, who won the Formula Renault Eurocup title at the Circuit de Barcelona-Catalunya in 2018. He said: “It is quite a nice place for me. It is also quite good for the fans who are missing out on watching racing.

“As a driver you always want to win the race and do better, but I am very new to that game and it is very different to real life.

“I had to learn a lot of new techniques in a short space of time and I wasn’t able to change my race strategy from the default settings.

“I didn’t really set myself any expectations. I just went into the race thinking I had to enjoy the experience and I just needed to do my best.

“I think top 10 is pretty good considering I had a limited amount of practice and if I had the game for a few weeks then I would have been up there.”

Fewtrell was aged eight when he decided he wanted to be a racing driver and he is currently representing Renault in F3.

He lives in Lower Shiplake with his parents, Paul and Louise, and brother Theo, 17, who attends Shiplake College. He was born in Birmingham, but spent his early years living in Malaysia and Singapore, for his parents’ financial advisory business and was 10 when they came back to England.

Russell, who won racing for Williams, needed to finish five seconds ahead of Leclerc after picking up a time penalty, but Leclerc was penalised by three seconds on the last lap.

There was a qualifying period to determine starting positions, followed by a 33-lap race, and Fewtrell had an early crash with McLaren’s Norris, which he managed to recover from.

He explained: “Lando span out in front of me on the first lap and I smashed into the back of him, which was quite funny. I was lucky not to get any damage. I have been close friends with him since we were very young. We were teammates in karting, so crashing into him was no problem for me.”

Poulter had already represented Renault for the Bahrain and Chinese races and he came 18th out of 20 drivers, one place above Barcelona midfielder Arthur Melo. Fewtrell added: “It was nice getting to know Ian through this. I was super excited when I found out.

“He is a big racing fan and has a simulator at home. He already follows me on Twitter and I was really happy when they said he was going to be my teammate.

“It was nice to talk to him and do some practise before the race. I was quicker than Ian, which I hope I would be, given he is a golfer.

“I think he had a few crashes and he wasn’t happy at the end of it. I guess that is why he is so successful because he is hard on himself and he takes things seriously.”

Fewtrell said he would be happy to be asked to take part in another race but he is eager for the real-life season to get underway.

His goal this year is to have success in the FIA Formula 3 Championship with Hitech GP, having finished 10th last season.

He said: “I am just waiting on the restart of the season, whenever that may be. I need to stay fit and sharp for when we do get going. It will be a shorter season, so I will need to maximise the points and hopefully go to Formula Two next year.

“The goal for is definitely Formula One. I just need to keep performing and, if I do that and there is a seat available, that’s the dream. To win F3 this year and finish top three in F2 next year would be great.

“We were so prepared a few months ago before lockdown came and I just really want to get going now. I have always had an obsession with cars and hopefully one day I can make it to the top.”

He represented the British team in the Asian F3 Winter Series and Macau Grand Prix last year. Previously he had raced in the Formula Renault Eurocup for two seasons, winning the “rookie” title in 2017 and the overall title a year later, which earned him his junior role with Renault. He was also British Formula 4 champion in 2016.