Lights out for bridge plan 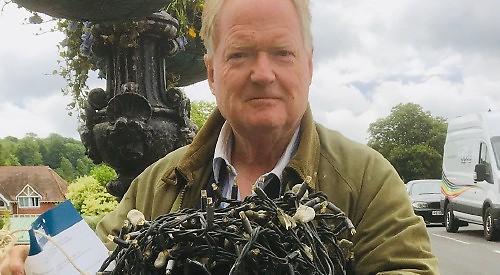 AN artist and entrepreneur has scrapped his plans to illuminate Henley Bridge permanently.

Clive Hemsley has also begun taking down the two strings of white LEDs that he put up on the Grade I listed crossing in February 2018 without permission.

He says he is exhausted by the negative and personal comments condemning his proposals and that he has been “defeated by Luddites”.

Mr Hemsley, of Hart Street, Henley, has twice sought planning permission to replace his temporary lights with something more permanent but was knocked back by Wokingham Borough Council each time. The second application was filed jointly with Henley jeweller David Rodger Sharp following a public meeting at the town hall in February which he organised and invited councillors and supporters and opponents to attend.

The pair argued the scheme would bring more visitors to the town and the colours of the lights could be changed for special events such as Henley Royal Regatta and the Thames Traditional Boat Festival.

They said many listed bridges in central London were being lit up under the Illuminated River art project. Opponents said that modern lighting was inappropriate to illuminate the 18th century bridge and claimed the lights could damage the stonework.

In a letter to this week’s Henley Standard, Mr Hemsley says: “It’s truly exhausting to get so many negative and personal letters of condemnation and frustrating considering that all these organisations were invited to our public meeting yet none could be bothered to come and give their views and advice.

“I would like to thank everybody who signed the petition in favour of the lights and for encouraging me to carry on. I apologise to all of you for not seeing it through.

“There are far more important issues to challenge us these days — you would think lighting up such a beautiful bridge would be mentally good for all of us.

“Although I’ve withdrawn my interest, I would encourage other locals like David, who are far more diplomatic and patient, to pick up the torch.

“I’m sure that one day, with the latest technology, it will serve the town proud and cause zero damage to the bridge.”

On Friday Mr Hemsley began detaching sections of the lights, which were attached using a high-strength construction glue, in areas where they could be reached from the river banks. He will remove the rest when he can access them by boat.

Mr Rodger Sharp said: “I completely understand why Clive has given up as this has been running for more than two years and I suppose he has lost patience.

“It has taken a huge amount of time, effort and cost to get this far and this isn’t his only priority.

“It’s very frustrating when he organises these public meetings only to have the plans rejected and opposed by people who haven’t come to see a sample of what the lights might look like.

“I hope we can find someone else who would be prepared to do it, or that maybe even the town council might be willing to move something forward.

“Thousands of people agreed that it would enhance the look of the bridge and the river and I truly believe it would have brought more people to the town.

“The bridge lit up looks so lovely on a cold winter’s night and really cheers you up if you’re feeling a bit blue.”

Town councillor Will Hamilton said: “Clive was incredibly well-intentioned and it was a lovely gesture which made the bridge look fantastic for a while.

“Unfortunately, in pursuing it, he ruffled the planning authorities’ feathers in the wrong way.

“It’s a shame he isn’t going ahead any longer but let’s see whether anything else can be set up.”

Wokingham Borough Council said Mr Hemsley’s application didn’t provide sufficient proof that the new lighting wouldn’t harm the bridge, nor that it would “conserve or enhance” the structure and its surroundings in line with planning law.

South Oxfordshire District Council expressed similar views, fearing the glue could open up joints in the stonework and speed up its erosion in the long term.

It said Henley didn’t share the “urban connotations” of the capital, adding: “The bridge itself is a polite form of architecture and it is unclear how the very modern lights can... be consistent with its architectural and historic character.”

Historic England wanted more proof that the scheme was safe and suggested lighting the bridge from the bank instead.

John Whiting, chairman of the Henley Archaelogical and Historical Group, which opposed the scheme, said he welcomed Mr Hemsley’s decision.

In a letter in last week’s Henley Standard, he said the installation of the lights was an offence in law as the Listed Building Act forbids modifying such structures without planning permission.

He said: “We’re satisfied that Mr Hemsley has chosen to abide by the law and hope he acts soon as he has been under order to remove the lights for many months.

“We also hope that when he does so, it doesn’t pull a piece of the bridge with it as the stonework is very soft and the balustrades are already heavily eroded.

“We weren’t against the idea of lighting, maybe with gentle floodlights underneath the arch, but that is not what he was proposing.”

More than 2,400 people signed a petition calling for the temporary lights to remain when Mr Hemsley was first ordered to remove them by Oxfordshire County Council, which is responsible for the bridge.

Mr Hemsley and Cllr Hamilton are now repeating calls for the council to mend damage to the underside of the bridge where boats have crashed into it.