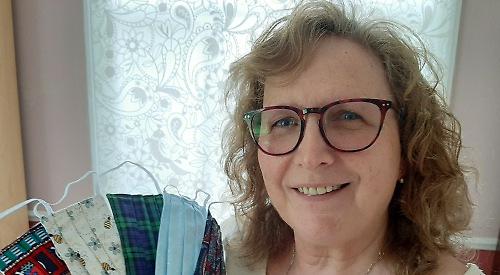 A WOMAN from Wargrave has handed out more than 1,000 face masks since the beginning of the coronavirus pandemic.

Susanna Farrow, who lives in Blakes Road, decided she wanted to play her part after seeing how other villagers were adapting back in March.

She does not charge for the masks, which are available in adult and child sizes, but people are asked to give a donation if they wish.

Through this, she has raised £1,000, which is being divided between six charities: Mind; SafeLives; Alexander Devine Children’s Hospice; Sue Ryder Duchess of Kent Hospice; Thames Valley Air Ambulance and Cornwall Air Ambulance.

Mrs Farrow said: “I was hearing so much about how kind everyone was being and Wargrave had got together a system where there were helpers looking after every road in the village.

“I thought ‘what can I do’ and I like sewing. I watched a video of how to make a mask and I thought ‘I could do that’ and so I started making them. The fabric I use is pure cotton. I have made nearly 1,100 masks now. A lot of people have really kindly donated and I have alreay given £500. I have another £500 and I will give the same charities that money now.

“It is so kind of people but I have never insisted. One person sent me a screenshot to show they had donated the money.”

Face coverings will become compulsory in shops and supermarkets from today (Friday) with fines of up to £100 fine for those who don’t follow the rule.

Mrs Farrow is able to make a maximum of 20 masks per day but she has recently had to stop taking orders due to demand.

When she started at the beginning of lockdown, she was initially ordering materials online but this proved to be difficult as some items took too long to arrive.

She asked members of the Wargrave community for help through Facebook and quickly received donations of elastic from the likes of the Brownies and Wargrave Theatre Workshop.

The biggest change to her operation came when fellow villager Karen Lloyd, who lives in Victoria Road, donated several boxes of fabric. Ms Lloyd used to run her own company called Sling Easy Baby Sling and had lots of leftover material. She stopped doing this about five years ago as she decided to return to nursing.

Mrs Farrow said: “The fabric is gorgeous. Some of it is organic and all of it is pure cotton. You need as tighter weave as possible for masks to make it the best it can be.

“I was originally buying the materials and it was going to get too expensive. What I was ordering online needed two or three weeks to be delivered and I bought 120 yards of elastic.

“I use curtain lining fabric as the liner on the inside, which makes for a really tight weave. I tweaked the design a little to make it easier to make lots of them and it has snowballed.

“I do have some funky fabric with flamingos and buzzy bees on them. The majority of them are tartan fabrics and plain colours. The pale blue chambray fabric is the most popular.

“It was a bit of a shock to hear they had become compulsory in the shops. My phone and iPad started buzzing and I have more than 100 on order now and I have had to say ‘stop, come back to me in a week’ on Facebook because I have so many requests.”

Mrs Farrow lives with her husband Stephen, a financial consultant, and they have two grown-up daughters.

She is a retired admin assistant and used to work for Hunt & Nash Surveyors in Wargrave before retiring two years ago. Before that, she worked in a similar position for Baker Hughes, an oil industry  firm, where she was for 13 years.

Mrs Farrow had a five-day break from making the masks about a month ago when her sewing machine stopped working. She had to ask her daughter Katharine to bring her old machine back from Bristol so that she could keep up with requests.

She added: “Because people come to our house to collect them, I have been really careful to step back and leave them outside. It has actually been very sociable because people have been so lovely and chatty. It means we haven’t felt isolated.

“I thought I would stop when I reached 1,000 and I think I will have to slow down because we are all getting out and about a bit more.”