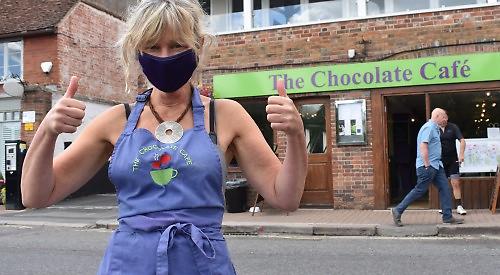 It is now being run by Vivienne Lee, who runs the Chocolate Café in Thames Side, Henley, and another one High Street, Goring.

The museum has been in talks with Ms Lee for some time as the previous operator Leafi, of London, was nearing the end of its contract.

The café will re-open on Thursday, offering tea and coffee, hot and cold lunches, cakes, cream teas and takeaway picnic boxes which customers can eat on the seating outside.

Ms Lee could also be asked to provide catering as part of the museum’s venue hire service. Museum director Sarah Posey said: “During lockdown we felt the time was right to make that change. It’s lovely to be working with someone who already has a local following and is held in such high esteem. Her businesses are thriving and she has a real dynamism and ambition.

“It’s too early to talk about any long-term plans for the café — for now, our focus is on the opening offer and we can think about the future down the line.”

Leafi took over in the autumn of 2017 after the previous operator Wild Fork left after seven months. Before that it was run by the Quince Tree at Stonor, which has since shut.

Ms Lee was suggested by a trustee. She and her colleagues have spent the past week or so preparing the new premises.

She said: “I’m super excited and honoured to be asked to take this on.

“We have to be mindful of the times we’re in so the focus will be getting ourselves established while ensuring everybody remains safe.

“We’ll be working with a similar menu so staff will be familiar with it. There won’t be too much for them to get used to on top of maintaining hygiene and social distancing.

“However, it would be amazing to be able to do catering for weddings, christenings and other parties in the future.”