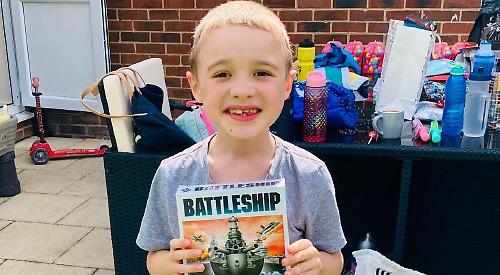 THE parents of a boy with a rare debilitating disease are looking for contractors to modify their home.

Ben Clarke, seven, has Duchenne muscular dystrophy and is set to lose his mobility and require a wheelchair within the next four years.

His parents, Alex and Lisa, want to extend and adapt their house in Wood Lane Close, Sonning Common, to make it fully accessible for their son.

The couple, who live there with Ben and their other son, Zak, three, are inviting builders, plasterers, electricians, plumbers and carpenters to tender for the work.

Mr Clarke said: “We’re looking for people with passion for getting involved with a project that’s going to help us as a family.

“The adaptation is important to make this house fully accessible to Ben. We have to make the whole house wheelchair accessible and that includes access to the front of the house.

“We’re going to have to put a porch in the front and take away the main retaining wall in the middle of the house.

“We’re also converting one of the rooms downstairs, currently the boys’ playroom, into Ben’s new bedroom and wet room.”

Mr Clarke said they had to go through a tender process in order to secure a £30,000 grant from South Oxfordshire District Council towards the work, which it is estimated will cost £100,000.

“We need at least three different people to quote for each piece of work,” he said. “It’s also good due diligence. Recommendations would be greatly appreciated and having a contractor that can do it all and use their team is an advantage.

“However, there’s also the benefit of being able to choose someone willing to donate some of their time.”

In March, the family held a fund-
raising ball at Henley town hall, raising £42,000 towards the cost of the modification.

They have obtained planning permission and hope the work can begin soon.

Mr Clarke said: “It’s vital it is completed. Our mission is to give Ben the best quality of life and part of that is making sure he is involved in every aspect of family life. At the moment if Ben was in his wheelchair full-time, he would not be able to access a lot of the downstairs.

“We won’t be able to live in the house while it’s being done so we have to factor in another £10,000 to £15,000 in rental costs for a property that’s suitable to live in while the work is completed.”

Ben celebrated his birthday on July 23 at home with his family and five friends from Trinity Primary School in Henley, who were in his “bubble”.

He was able to return to school for four days during the final two weeks of last term, having been shielding with his family throughout the coronavirus lockdown. The children played football and also had a water balloon fight before they smashed a Darth Vader piñata filled with sweets.

Mr Clarke said it was wonderful to see their sons enjoying themselves in a normal way as the lockdown had affected their mental health.

He said: “The ability to have Ben’s friends round at the house to just play in the garden and do some activities, eat lots of sweets and have a birthday cake was incredible. It was really good but exhausting. I did end up getting soaked by them all.

“His friends were all very generous and gave Ben a present. He’s massively into Star Wars and he got some Star Wars Lego and a fantastic Nasa back pack and dehydrated ‘space food’.

“He loves Hot Wheels and got some of that as well as a radio-controlled car and tent. He was also really, really happy to have video messages from lots of his friends, which I had put together for him.”

The family will provide a 64-page, architect-approved document outlining the work.  They will also research the firms that apply. To be considered for a contract, email benvsduchenne@gmail.com