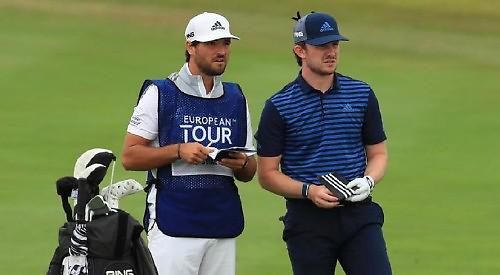 A CADDY from Badgemore Park Golf Club in Henley accompanied a professional at this year’s US Open.

Lyle Phillips flew out to New York last week with Scottish player Connor Syme, for whom he has worked since June last year, as he took part in the tournament for the first time.

Syme didn’t make the 36-hole cut after the second round of the four-day competition on Friday but Mr Phillips said the pair enjoyed the experience.

They were competing at Winged Foot Golf Club in Mamaroneck, about 25 miles north of New York City, which is regarded as one of the Open’s hardest courses as many winning scores still come in over par.

Mr Phillips, 26, who lives at Nuffield, has played golf since he was 10 years old and his brother Asa is a professional.

At the US Open he had to walk the course before the tournament started so that he could advise Syme on the best strategy for each hole. The pair would usually have played before a crowd of more than 45,000 spectators but this year there were no stands because of restrictions to prevent the spread of coronavirus.

The only people watching were officials, journalists and a small number of neighbours whose back gardens overlook the site — plus millions of TV viewers around the world.

Mr Phillips said: “The crowd element is a big part of it so while going to New York was a fantastic experience golfing-wise, we missed out on being in front of so many people.

“It was still some week though and a bit surreal being surrounded by some of the game’s greatest players —  you have to pinch yourself when you see them.

“Winged Foot is based around a residential area so there were about six houses where the owners had put up little grandstands with about 15 or 20 people watching. That was as close as we got to a ‘crowd’ as such.”

He said it was a common misconception that caddies play the course themselves but he and Syme generally agreed on the best approaches after he had inspected it.

“It’s a shame we don’t get to play the courses as we’ve visited some good ones,” said Mr Phillips. “But everything flowed once it was underway and there wasn’t much disagreement between us on how to do things.

“Winged Foot is one of those courses where, in trying to get it up to championship standard, they’ve just made it impossible. There’s unplayable rough and super-tight fairways so it’s a real nightmare.

“I could tell it was going to be difficult but Connor is very accurate right off the tee, although it’s so demanding that you can’t keep every ball on the fairway.

“I was scratching my head a bit but you have to remember that professionals are up to the challenge. I’d say Winged Foot is impossible for a club golfer but for the pros it’s just bringing them down to our level. It’s a stunning course and a good test.

“I didn’t feel too far out of my depth because it’s what I do week in, week out, although there is that added pressure because of where you are and what you’re playing for. But at the end of the day, you don’t do anything different — as with any other week, you just do your best and see how it goes.”

Mr Phillips, who attended Langtree School in Woodcote and The Henley College, took up the sport at Goring and Streatley Golf Club but moved over to Badgemore Park as he knew Jonathan Dunn, its former professional who is now based at Sonning Golf Club.

He began caddying four years ago and worked for three other professionals before a mutual contact invited him to work for Syme, who lives next to St Andrew’s Links, near Perth.

Syme won his spot at the US Open after taking part in socially distanced qualifiers.

Mr Phillips said: “I’ve never really had the ambition to turn pro as a player — I just play for fun when I come home.

Caddying was kind of a hobby to begin with but it has gradually developed into a full-time job.”