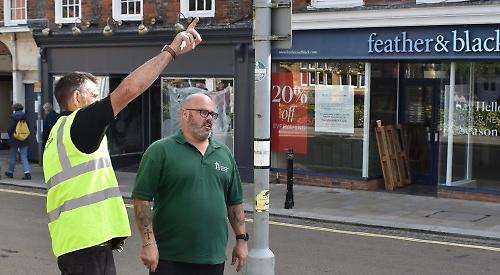 THE Deputy Mayor of Henley fixed two road signs in the town centre which were causing chaos after being flipped to face the wrong way.

David Eggleton was helped by Alan Webb, of Henley Town Council’s parks services team, when a resident alerted him to the problem on Monday morning.

Someone had turned round the “No entry” signs at the top of Market Place. These are meant to stop drivers from turning left into Market Place from the direction of the town hall as this goes against the one-way system which comes up from the Hart Street crossroads.

On the reverse of each is a “No right turn” sign to stop those driving towards the town hall from going against the clockwise one-way traffic flow. With the signs facing the wrong way, some drivers were going the wrong way and approaching other vehicles head-on, only to turn around when bystanders explained the situation.

He then fixed the signs while standing on top of the parks services team’s pick-up truck and cleaned them while he was up there.

As he carried out the work, a car almost went the wrong way down Market Place but was warned by a loud beep from the vehicle behind. A bystander told Cllr Eggleton that she had reported the vandalism to Oxfordshire County Council, the highways authority, a week earlier.

He said: “Some people kept stopping and wondering where to go because it looked like they couldn’t go any further. Luckily, it didn’t happen too often because most traffic is made up of local drivers who already know how the layout works here.

“Whoever did this must have needed a lot of force because those signs are clamped tight and they buckled the fastenings to pivot them round. It’s very annoying and you wonder how long they’ve been like that and why something wasn’t done sooner.”

The county council said it had not received a report.