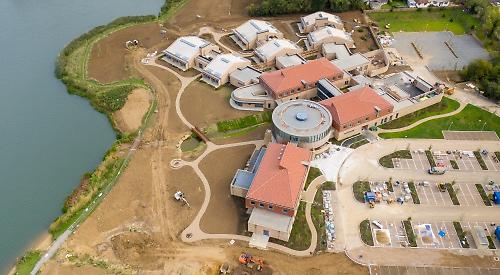 THE head of a new hospice that will serve Henley and the
surrounding villages says it is important to offer in-patient care.

Thames Hospice is leaving its home at Pine Lodge in Windsor, where it has been based since the charity was founded in 1987, to a new purpose-built facility by Bray Lake.

The £22 million hospice will welcome its first patients on October 12.

The 17-bed Windsor hospice was typically running at 93 per cent of its capacity — the highest inpatient occupancy rate in the country — with a waiting list of up to 10 patients at any one time.

Debbie Raven, who was appointed its chief executive in 2015, says the new building will have 28 beds, allowing it to serve more people and at a higher standard in line with modern expectations.

The charity used to have 12 beds at Joyce Grove, where it has been based since 1979, but closed the last of these in spring this year, saying more people wanted to be cared for at home.

The decision sparked outcry among the families of current and former patients, who said they couldn’t have coped without access to inpatient care, but Sue Ryder said it was responding to demand.

The charity’s new hub will continue to offer day services like counselling and complementary therapies but there won’t be any inpatient provision.

Mrs Raven, a nurse who has held senior management posts in both the NHS and private sector, says many patients do wish to die at home.

Thames Hospice supports this through its outpatient services, which it won’t extend to South Oxfordshire to avoid overlap with Sue Ryder.

However, many people become too ill for their families to cope with and a hospice bed offers much-needed respite for all concerned. Mrs Raven said: “At the moment we’ve got a young gentleman who’s in his early fifties and was suddenly diagnosed with a highly aggressive cancer about 10 weeks ago.

“He lives alone and this came completely out of the blue, while the coronavirus lockdown added further to the impact on his psychological health.

“He has very quickly gone from being reasonably healthy to being unable to walk, extremely scared and distressed and unable to care for his basic physical needs.

“He’s also in a lot of pain, which we need to get on top of because it’s so distressing emotionally.

“We can only offer our total care package in the hospice. There really isn’t such a thing as ‘24-hour care’ at home and this patient is just one example of someone who really needs to come in.

“Mothers who are seriously ill may wish to leave their homes because they don’t want their families to be impacted or to associate unpleasant memories with their home environment.

“Some people have physical symptoms that just can’t be controlled in any other setting. Pain presents us with a lot to unpick and treating it can require hourly medication adjustments and psychological interventions.

“You can’t standardise this because people don’t fit into boxes but we do keep patients at home if we can. That’s normally their wish but those who come in have usually tried everything until the situation has become unsustainable.

“They may also be coming straight from hospital, which isn’t a good environment at the end of life, especially with coronavirus rearing its ugly head again.

“I can’t speak for Sue Ryder or its decision-making process but the hospice world is small with only about 220 in the UK of varying sizes and management structures.

“We all communicate closely and support our peers so if we’ve done something here that’s worked well, we’ll share that and vice-versa.”

Thames Hospice will continue serving East Berkshire and South Buckinghamshire predominantly but will accept anyone in genuine medical need.

Oxfordshire’s NHS clinical commissioning group, which is responsible for delivering the county’s services, has warned the charity could face more demand from Henley after Sue Ryder closed its beds.

Mrs Raven says it has taken patients from this area before and will gladly continue.

Referrals are typically through a GP or hospital, although patients can refer themselves in which case the hospice usually asks to see records.

“If somebody needs us then we’ll be here for them,” said Mrs Raven. “With more bed capacity, we’ll be looking at everyone and asking what the priority is and who needs us most. Clinical need is absolutely the driver.

“We’re also very happy for anyone to come and look around if they’re planning their care.”

Thames Hospice began planning its move six years ago after commissioning an independent report to predict demand until about 2040.

The hospice has single bedrooms with en-suite bathrooms, instead of bays with multiple beds, which 98 per cent of patients requested when surveyed, and an in-built system of piped oxygen.

Mrs Raven says these will reduce the risk of infection and help anyone with breathing difficulties during the coronavirus outbreak so they were a worthwhile investment.

The hospice stands on an eight-acre plot with accessible gardens and also has a dedicated family room, a day therapy centre offering counselling and other services, an education centre, a gym and a “sanctuary” for quiet reflection and special occasions.

The charity, which costs £8 million a year to run, hopes to raise £6 million towards the build through a public appeal and has so far raised £5.5 million.

The rest should come from various events and challenges, including a mountain bike ride in the French Alps next September.

An opening ceremony has been postponed until next year because of social distancing regulations but some “major” donors will take tours to celebrate this month’s launch.

Mrs Raven said: “It feels like this process has been going on for a lifetime but it’s amazing and incredibly exciting to have reached this point.

“It’s also quite emotional as it has been so long coming and we’ve had to cope with many different curve balls, including the Brexit referendum and the covid-19 outbreak.

“Everyone who comes to Pine Lodge says it’s incredible but it’s almost four decades old and when I look around our new hospice, the facilities are just stunning.

“The old hospice served the community incredibly well but demand was far exceeding supply and the time was right to move on.

“We now also have a café that’s open to everyone and we encourage people to use it even if they don’t need our services.

“We rely on the community for more than 50 per cent of our funding so we want people to be part of ours.”

She said the charity’s shop in Henley, which opened at the former No 27 menswear premises in Duke Street in December 2017, had been consistently popular since its launch.

“It has always been successful, especially since it re-opened after lockdown,” said Mrs Raven.

“We’re really pleased to be in there as we have some committed staff and a loyal customer base.

“We always say our shops are our face on the high street and an extension of our hospice, so I think it has made people more aware of who we are and how we can help.”