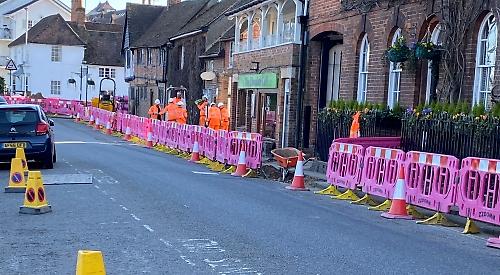 A YEAR-LONG project to lay underground fibre-optic cables in Henley has been completed.

Zzoomm, a broadband internet service, which is based in Station Road, started work in October last year and first switched on its network in January.

About 900 properties in Henley are already signed up to the service out of 5,700 buildings that can access it.

Some areas of Henley that can be connected include Thames Side, Hart Street, Riverside, Station Road, Reading Road, Queen Street, Duke Street and Bell Street.

The company says it can offer faster speeds because customers’ premises will be linked to the wider network by fibre-optic cables, which transmit data through plastic strands using rapid pulses of light. It offers download speeds up to 200 times the national average. The roads of Henley had to be closed in stages while contractors carried out the work, which included digging trenches to lay the underground fibre-optic cables.

Retailers in the town centre slammed the company in February for the road closures as they weren’t consulted about more than three months of work.

Traders said at the time that the work would affect footfall during one of their busiest periods when they were already struggling due to online competition, high rents and business rates.

Zzoomm agreed with the town council not to work in June and July due to the Henley Royal Regatta so had brought the work forward but retailers said that May and early June were still busy times.

However, the regatta was cancelled due to the national lockdown and all non-essential stores were forced to close.

The contractors took this opportunity to continue working throughout the summer months as key workers.

Matthew Hare, chief executive of Zzoomm, said: “Henley has been Zzoommed. People now have full fibre all across the town, giving them access to some of the fastest residential and business broadband speeds in the UK.

“The whole Zzoomm team would like to thank all residents and businesses as well as Henley Town Council and Oxfordshire County Council for all the support and understanding that we have been provided with while we were in construction. All finished now: Zzoomm on Henley.”

The company has now started work in the city of Hereford.