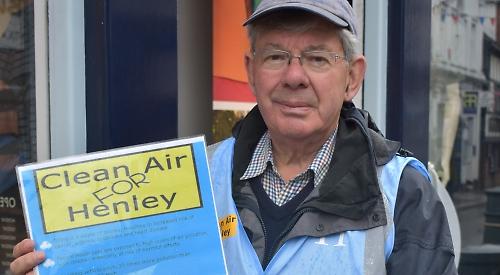 CAMPAIGNERS for better air quality in Henley say they are disappointed after another one of their banners was torn down.

Ramsay Adams tied the sign to the railings outside Rupert House School in Bell Street on Thursday last week.

The banner was aimed at drivers and read: “No idling zone! Covid & air pollution linked — switch off that engine.”

But Mr Adams’s partner, Rachael Shaw, found it had been removed when she went for a run the following morning.

The pieces of string which had been used to attach it were on the pavement.

This was the latest in a series of similar incidents.

In September, a banner outside St Mary’s Church was removed and thrown in the river and two banners in King’s Road car park were damaged so that the wording was obscured. Last month, another sign was removed from the metal railings outside the entrance to Waitrose.

In all cases, Mr Adams had permission from the owners to display the banners. He said: “We believe this is a targeted attack — someone really doesn’t like this campaign.

“I often tell people about idling and they can get a bit rude. Nobody likes being told off but nobody likes pollution either. Maybe it is someone who I’ve stopped in the past.”

Mr Adams, 62, a retired sales director, of Ravenscroft Road, Henley, has been campaigning to improve air quality in Henley for three years.

He said: “Idling is a totally useless activity. When your engine is running while your car is sitting still, it is 20 times more polluting than when you’re moving.

“I have had the odd person rev their engine when they drove by me but we’ve had a lot of people thanking us for the work we’ve done. Three years ago, a lot of people didn’t even know what idling was and now are a lot more aware that climate change is an issue.”

Mr Adams intends to replace the sign outside the independent school and also hopes to obtain CCTV footage to try to identify the culprit.

He said: “It only costs about £20 to replace but it is more about the principle. People die every year as a direct result of air pollution.

“All schools are problem areas because of the lung capacity of younger children.

“The more air pollution there is around the school, the worse it is for things like asthma and brain development.” David Dickie, founder of the Cleaner Air for Henley campaign, called the culprit “cowardly”.

“They can come and discuss it with me if they want but I can’t believe it hurts them so much that they feel the need to act in this way,” he said,

“We have gone through all the correct protocols and nobody else has questioned it.

“I find it very cowardly and unsociable, regardless of your feelings on the subject. I understand you might have a different point of view but to go and destroy other people’s property is not right.”

Mr Dickie, of St Katherine’s Road, added: “I really care about this project and the health of the children in the town.

“The town council has been very supportive and we approached schools and churches to get behind us, which they have.

“We have had many successes with the campaign and I’ve had a lot of people coming up to me saying, ‘We love what you’re doing, keep going’ so the message is getting out there. I won’t let this stop me.”