Triumph of the teenage Trooper 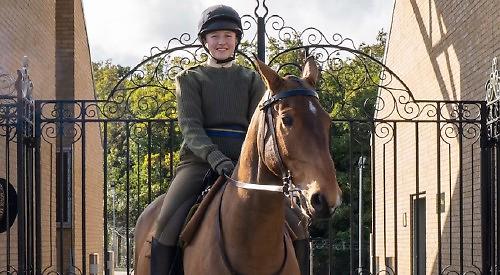 A TEENAGER who struggled with severe dyslexia at school has been praised after she joined a mounted army unit.

Gunner Millie Cooke was presented with the Regimental Sergeant Major’s Coin for best performance in her group during induction to the King’s Troop, Royal Horse Artillery.

The 17-year-old began training at its Woolwich Barracks in Greenwich in August and recently completed her recruit’s ride, which is the first formal assessment for newcomers.

She had to vault on to a horse from the ground, which took several months to master, then ride in formation at a walk, trot and canter and lead two riderless horses from her own saddle.

Millie, from Caversham, didn’t realise she had done so well until she received the award at a passing out parade.

Once she has completed her detachment ride, a similar challenge that is undertaken in full uniform while carrying a sword, she hopes to participate in state ceremonies such as Trooping the Colour, which takes place on the Queen’s official birthday in June.

The King’s Troop is among the units which Her Majesty inspects before it leads the Household Cavalry in a parade. It then fires a 41-gun salute from Green Park as the monarch returns to Buckingham Palace.

Millie, who lives with her mother Zoe Bowen and stepfather Ross Bowen, says she is proud because she struggled academically and her teachers assumed she was “lazy” until she was diagnosed with dyslexia aged 10.

“I found reading and writing difficult so it was stressful,” she said. “Everyone else knew what to do in class but I had no idea and it was a relief to learn I was dyslexic as the teachers were a lot nicer.”

She settled at Langtree School in Woodcote as the staff were helpful and when she was in year 9 they suggested she try riding.

Millie took introductory lessons at Checkendon Equestrian Centre and was soon hooked so she kept it up before moving to RKD Ponies in the village.

She got her first horse, an Irish sports breed named Casper, for Christmas in 2017 and then moved to the Woodland Hunt Pony Club at Upper House Farm, Harpsden, in 2018.

She then got Vegas, a five-year-old mare, and relocated again to Hardwick Stud at Whitchurch.

By this point she had learned to jump and was frequently winning competitions.

Millie said: “I was quite scared on my first lesson but as soon as it was over I nagged Mum to let me do it again.

“I would turn up to lessons stressed and moody but come away with a massive smile because I’d achieved something.

“When I was younger I tried every single hobby — karate, judo, football, hockey, you name it, but nothing really clicked until then.

“I guess I enjoyed being around animals and the connection you make with them.

“While I was at RKD, there was this big cob named Charlie who everyone was afraid of but I never had any problem with.

“I was pleased just to get around the course at competitions, though it was nice when I won. Mum absolutely loved seeing me do so well.” Millie applied to join the King’s Troop after chatting with servicemen and women at its recruitment stand at the 2018 Olympia Horse Show.

She passed a physical assessment where she ran one-and-a-quarter miles in 12 minutes and threw a 5kg ball over 3m.

After achieving a GCSE in drama, she left school and home in September last year to undergo nine months’ basic training at a barracks in Harrogate in North Yorkshire. She said: “Joining the army sounded pretty cool and I was amazed to get in. It meant there wasn’t pressure to think about my grades and I had the next stage of my life sorted out. It’s not easy to leave home at 16 and some of my classmates thougth it was stupid but my friends were supportive. It was strange to hear them talking about college when I was doing something totally different. Harrogate is a four-hour drive away and I was sharing a room with 11 other girls, which I’d never done before.”

Millie learned basic army skills such as firing and maintaining a rifle, first aid and throwing grenades and had to complete a week-long camp involving mock ambushes in the middle of the night.

The programme continued with social distancing when the coronavirus pandemic hit in March and in June she spent five weeks learning radio communications at Larkhill, near Salisbury Plain.

She said: “Phone time was limited to start with but I phoned home every single day and still do. I’ve always been proud to be able to tell Mum what I’m learning.”

From there it was straight on to the Royal Artillery Barracks, where the 120 or so horses are owned by the Queen. Millie’s sub-unit has 18 and she rides a different one each day as well as helping to groom and muck them out.

She learned to mount from a standing position by using a vaulting horse.

“It took a long time to pick it up,” she said. “They asked me to do it on my first ride and I couldn’t as I’d never done it before.

“Someone showed me how it’s done and made it look easy but it takes a lot of upper body strength. I ended up with a lot of bruises on my arms while I was learning.

“Everyone here is very supportive. There’s quite an age difference and when some of the older ones heard I was struggling, they gave loads of advice and demonstrations when we were on night shifts.

“I was really worried that I wouldn’t be able to do it on the recruit’s ride but there weren’t any problems.”

Millie said she was delighted to receive the RSM’s Coin in front of her colleagues.

She said: “I think I was the only one who didn’t know I’d got it. You can get it for lots of different things, like being the best rider or having the best kit. Quite a few people have them but they’re not that easy to get.

“Now I’ve got my next ride coming up and I’m just hoping the horse doesn’t gallop off when I’m holding the reins in one hand.

“I’d love to be on the gun team, though you’ve got to do more training for Trooping the Colour.

“Looking back, I’m so pleased that my school suggested riding. I’ve found my strength and I really don’t know what I’d have done otherwise.

“Joining the King’s Troop has made me more independent and I’m excited for the future as no two days are the same. I remember watching them in action and thinking ‘I wish I could do that’ and now I can.”

Mrs Bowen said: “We were very worried about Millie when she was younger — she’s a grafter who gives 110 per cent but was struggling to achieve what was on the syllabus.

“We were completely blown away by how she took to riding. The people at the recruitment stand were very honest — they said she’d have a ‘year of hell’ in training but it would all be worth it and a lot better than an apprenticeship.

“She won’t be sent overseas but she’s still ‘on the frontline’ in London and you do worry but it’s a parent’s job to open doors for their children and we’re so very proud of all she’s accomplished.

“A teacher at another school said she was ‘never going to set the world on fire’ but she’s absolutely flourishing by doing something she loves.

“She can’t wait to have a picture of herself doing the gun salute so she can caption it, ‘A teacher said I’d never set the world on fire — boom!’”