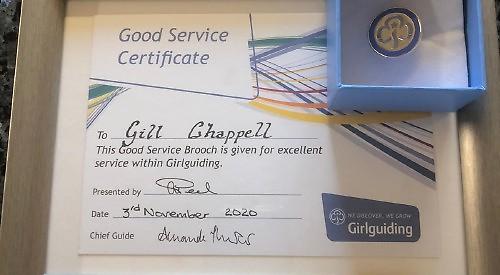 A WOMAN who has been involved with 1st Henley Guides for more than 25 years has been honoured.

Gill Chappell, of Auton Place, Henley, received the Good Service Brooch after being nominated by her fellow leaders.

The brooch can be awarded at county, regional and national level and she received the county service award.

Mrs Chappell was in the middle of a Zoom call with her guides when there was a knock at the door and she was presented with the brooch and certificate by division commissioner Andrea Bain.

She said: “I was completely stunned — I was not expecting it at all. Because I had started the Zoom call, I was able to tell everyone the good news straight away.

“I was nominated by the other guide leaders, a brownie leader from Henley and the current division commissioner.

“It has been hard this year and I really want to get back to having proper meetings but it is quite amazing how we’ve managed to keep going.”

Mrs Chappell lives with her husband Phil, with whom she has run GPC Marketing in Henley for the last 15 years, and has three adult children.

She was a brownie leader in Tilehurst in Reading before she moved to Henley 26 years ago.

She has been the unit leader for 13 years and was previously the district commissioner and division commissioner for the Chiltern Division. Her commendation reads: “She is diligent, approachable and encouraging, working tirelessly, going above and beyond to maintain the standards of Girlguiding, giving both girls and leaders the best experiences.

“Younger, less experienced leaders value her tremendous support. She is always there to reassure and encourage anyone in need, answering questions and keeping in touch.

“One leader valued her help with a difficult situation in her unit, which enabled the relationship problem to be resolved with a positive outcome.

“Two of her assistant leaders are so inspired by her that they have continued to commute to meetings even after moving to a different area.

“When lockdown came, she set up unit Zoom calls and invited the Brownies to join in as well and both girls and parents were extremely grateful.”

There are 30 girls at 1st Henley Guides. Although face-to-face meetings have been infrequent since March, the group continues to meet online with activities such as a regatta party, singing and crafting.

Mrs Chappell said one of the highlights of her time as a guide leader was being chosen to meet the Queen when she opened the Perpetual building in 1997 as she was then the district commissioner. Another fond memory was a trip to Switzerland in 2014 when the unit celebrated its 100th anniversary. Other centenary celebrations included a boat trip on the river for families and former guides.

Mrs Chappell said she had enjoyed her time with the guides and planned to continue.

She said: “I was a brownie and guide myself and when I moved to Henley I was looking for something to do for myself.

“I was a stay-at-home mum and was trying to get the contact details for my son to join the cubs.

“The lady I asked was involved with guiding and we got talking and that is how I joined.

“It has really enriched my life and I have learned a lot about myself and about the organisation. It is very rewarding teaching young people, especially as some of the guides have stayed on as helpers.

“I would like to thank everybody who nominated me because I was not expecting it.”