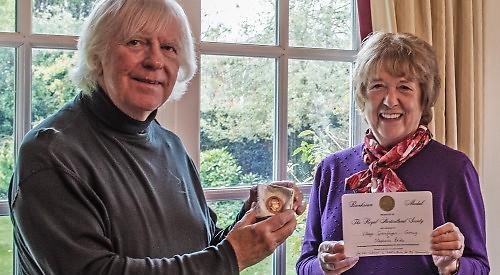 THE chairwoman of Goring’s award-winning entry to the Britain in Bloom competition has been honoured by the organisers.

Stephanie Bridle was presented with the Royal Horticultural Society’s Banksian Medal, which recognises those who make exceptional horticultural achievements in their communities.

She and her volunteers have been planting and maintaining the village’s summer floral baskets since 2007.

They have entered the annual competition in most years since 2012, winning their first national gold award in the small town category last year.

They have also won five golds and two silver gilts in that category in the Thames and Chilterns region.

The RHS Banksian Medal is usually awarded to the person who scores the most points in the Goring Greenfingers gardening club’s annual summer show at the village hall.

This year’s show was called off because of the coronavirus pandemic so the society told the club to either keep it back for next year or present it to a worthy recipient of its choosing.

The Greenfingers committee gave it to Mrs Bridle because she and her team have improved many areas of the village.

As well as planting up baskets and troughs, they have restored several rundown areas including an embankment at Goring station, the BT telephone exchange building off High Street and a corner of the Gardiner recreation ground. They have also supported projects by Goring Primary School and the Withymead nature reserve just outside the village.

Patricia Bradstock, the club’s chairwoman, said: “The RHS said it should go to anyone who enjoys gardening and ‘prettying up’ places or has supported their communities to do that.

“We thought Stephanie had worked so hard over many years and was the perfect recipient.

“When you walk into any town or village in the summer, it’s such a pleasure to see well-thought out flower arrangements.

“The Goring Gap in Bloom committee make it look so bright and joyful and we get a lot of comments to that effect from visitors. The flowers go right across the bridge and make it look inviting.

“What they’ve done with the station is glorious, too —  the daffodils look lovely in the spring. Stephanie puts so much effort into organising all this, so it’s well deserved.”

Mrs Bradstock and Greenfingers chairman Derek Leary presented Mrs Bridle with the medal at her home in Cleeve Road, where she lives with her husband Ron, before the coronavirus restrictions on meeting indoors were tightened up.

Mr Leary said: “Stephanie has been absolutely marvellous and we were pleased to award it.

“Goring Gap in Bloom has enjoyed great successes in recent years and it’s all down to her.”

Mrs Bridle, who was given the freedom of Goring in 2017, said the honour came as a surprise.

She explained: “When they said they wanted to come round, I thought it was to discuss a project we’d been working on.

“When they turned up I made coffee and that’s when they told me the good news. I was delighted but very humbled and I’d argue I’m accepting it on behalf of the entire team. A lot of people have worked very hard to reach the stage we’re at now and although it’s me who nags them to come out and do the work, the village could not have achieved this without them.

“It’s a lovely medal with an historic provenance so I’m very honoured to have it.”

The medal is named after Sir Joseph Banks, a botanist and former president of the Royal Society, who travelled across the South Pacific on HMS Endeavour with Captain James Cook in the late 18th century. Once someone has received it, they are not eligible again for at least three years.

The Britain in Bloom competiton didn’t take place this year because of the pandemic but the Goring committee wasn’t going to enter anyway, saying it wanted a break after last year’s achievement.

It hopes to enter the competition next summer but is currently deadlocked in talks with the parish council over funding.

The council has previously awarded up to £3,000 annually but has frozen its grants scheme, saying other groups might need funding because of the impact of covid-19.

It is also holding money for other works such as installing LED street lighting.

It says it could provide the funds if the Bloom team became a committee of the council but Mrs Bridle says giving up its independence would make it harder to work with other bodies.

If no agreement is reached by March 31, the council will allocate the money towards improving the village’s green spaces.