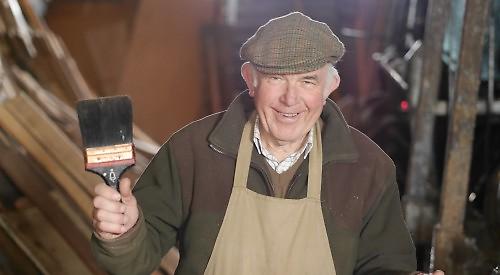 A LIFELONG Henley resident who died earlier this year has bequeathed £20,000 to the town’s 60-Plus Club.

Edward “Ted” Dorey was a keen user of the day centre in Greys Road car park and wanted to ensure others would continue to benefit as it has struggled financially in the past.

The money comes from the sale of Albert House in Greys Road, where the 85-year-old lived for most of his life before downsizing to a neighbouring property in 2015. He died at home on February 17.

Mr Dorey, a retired joiner, wood turner and carpenter, also left a 3ft by 3ft portrait of himself which was painted by Henley artist Clive Hemsley. This was delivered to the club on Saturday by Dean Allen, a former neighbour who knew Mr Dorey from a young age and was both his carer and executor of his will.

The painting has been hung on the wall at the centre in his memory.

Mr Dorey’s gift is about four times the amount which the club usually receives annually as well as dividends from investments, membership fees and a £15,000 grant from Henley Town Council, which owns and maintains the building.

The money will probably go towards general running costs, which include the provision of a hot meal on Mondays, Wednesday and Fridays and a light lunch on Thursdays.

Once normal service resumes following the coronavirus outbreak, members will be asked whether a share could be spent on other projects. The club had to close when the pandemic hit in March but it has run a socially distanced coffee morning twice a week when restrictions have allowed.

During the crisis, it has handed out more than £1,000 worth of free meals donated by the Cook food store in Duke Street.

Three years ago, the club faced a funding shortfall of £5,000 but the situation turned around after the Henley Standard highlighted its plight and donations came pouring in.

“It’s absolutely fantastic and extremely generous,” she said. “We typically budget for £5,000 a year in donations so by our standards this is a huge sum.

“Ted used the club a lot and you could see it was important to him. He was a lovely Henley character who’d worked on the building in the past so he clearly knew it well. It’s lovely to think that we’ve given him so much and now he’s giving back to other members.

“The club is a real lifeline in difficult times as elderly people can become isolated and need somewhere to enjoy company and share stories.

“Our team puts a great deal of work into keeping everything going so it’s encouraging to know our efforts are appreciated.”

Mr Dorey, one of five children, was born in Western Road and his family moved into Albert House when he was a few weeks old.

His parents, Katherine and Percival, were initially tenants before buying the house in the Sixties and then leaving it to their son when they died in 1985.

Mr Dorey left the National School in Deanfield Avenue aged 14 and became an apprentice carpenter before taking a City and Guilds qualification.

In 1955 he bought the workshop behind his house, which was only recently torn down and replaced with a new dwelling.

He famously drove a blue Volkswagen van for many years and kept rough collies which he loved walking along the River Thames, the last before his death being Foxy.

He was also a boat owner and had many friends on the River Thames.

He was cremated at Reading in March, shortly before the lockdown, and his ashes were interred at Holy Trinity Church in Henley, where he lies with his grandparents, parents and sister Veronica.

Mr Allen, 61, who now lives in Twyford, was born next door to Mr Dorey and has fond memories of him from childhood.

He had been caring for him for the final decade of his life.

“Ted was well-known and respected in Henley and he loved the 60-Plus Club,” he said.

“He went there every day for his lunch — he was a right nightmare on his mobility scooter as he’d charge across the car park, oblivious to any other traffic, then crash into the flower pots and head inside.

“His new house had all modern facilities but he’d used a Rayburn [cooker] all his life so it was easier to go over and grab a hot meal.

“His timing was always awful but they knew to expect him late and kept his food warm until he arrived. He’d always tell me in great detail how they had some ‘lovely sausages’ or whatever.

“It meant a lot to him and he wanted to leave some money so that other people could enjoy it like he had. They’ve struggled for money in the past and he wanted them to have a bit of security.

“It’s very much the kind of person he was — people would turn up at his workshop asking him to cut something and he always said yes.

“When the Henley Standard wrote a piece about his life in 2014, it jogged a lot of memories and I received so many letters from people he’d built things for. It’s important that the community recognises his generosity.”