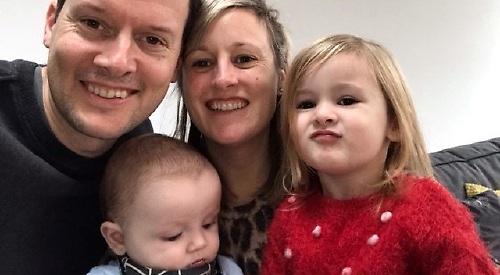 A MOTHER from Wargrave has raised £1,000 for the village pre-school by walking at least 12,000 steps every day in December.

Emily Childs decided she wanted to help after learning that the
pre-school, which her three-year-old daughter Lilly attends, had lost £19,000 as a result of the coronavirus pandemic.

The 36-year-old lives in School Lane with her husband Rob, 39, Lilly and her eight-month-old son, Stanley.

Every day, including Christmas Day and Boxing Day, she walked around Wargrave looking at the festive decorations, usually accompanied by her children. She received donations from friends, family and fellow parents.

Mrs Childs said: “I raised a lot more money than I set out to and the challenge itself went quite well. There were days when I was a bit exhausted after being up at night with the kids but I really enjoyed it.

“I spent a lot of time walking around looking at the Christmas decorations and going down to the church but I also did lots of steps at home —  it’s amazing how many you can do just doing jobs around the house.

“There were also a few days like Christmas Day were I just hit my 12,000 goal and didn’t push myself.

“I am still walking every day. It has become a way of life to just to get up and get out of the house every day. I think I will be buying a proper pair of walking boots.

“Walking is also one of the only things we can do at the moment. It has helped to keep me sane throughout all this.” Mrs Childs works in quality assurance for cleaners Molly Maid but is currently on maternity leave.

Lilly has been attending the pre-school three days a week for the last year and she says her confidence has grown considerably.

The pre-school is a registered charity, which was founded in 1980 and is run by a committee of volunteers.

Mrs Childs added: “It is lovely and my daughter and all the other kids are really happy there.

“It would be such a shame if anything did happen to it because they do struggle financially.

“I don’t think there is an immediate risk of closure but with everything that is going on at the moment they need all the support they can get. It has been such a wonderful place for Lilly and she absolutely loves it — she can’t wait to get back.”

The pre-school has been running a series of fundraising initiatives, including an online auction of promises, which raised £1,359.

Layla Pipe, the fundraising
co-ordinator, said: “We would like to say a huge thank-you to Emily. We know it was a massive endeavour and she was out there, rain or shine, quite often with both her children.

“The money will help us to keep the pre-school as a really engaging environment for the children. It also represents how much support we have had from the village and from parents.”