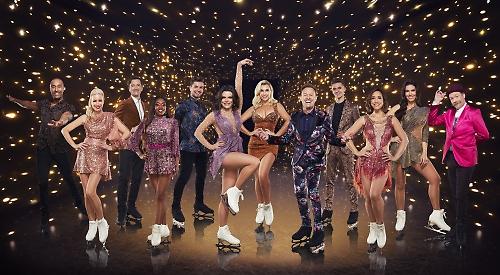 VIEWERS can expect to see Graham Bell perform in all kinds of colourful costumes.

He has shared clips on his Instagram feed of himself rehearsing in fancy dress but hasn’t revealed whether any outfits will make the final cut.

One film shows him on the ice at Bovingdon dressed as an American fighter pilot from Top Gun with dance partner Yebin Mok in a Navy-inspired top.

The pair danced to Danger Zone by Kenny Loggins, the theme from the 1986 film, with arms outstretched like aeroplanes.

Bell captioned it: “I feel the need... the need for speed” in reference to a quote by Tom Cruise’s lead character, Maverick.

Another clip from New Year’s Eve shows the pair dancing a Highland-style routine with Bell in a kilt and the caption: “Happy Hogmanay!”

Bell filmed himself dancing as a biker to Steppenwolf’s Born To Be Wild, as James Bond to the character’s theme, as AC/DC guitarist Angus Young to the band’s hit Hell’s Bells and as Groot, from Marvel’s Guardians of the Galaxy, to Hooked On A Feeling by Blue Swede.

In his first video, he danced nude apart from a pair of blue socks and some boxer shorts which looked like he was wearing a stripper’s G-string.

The routine, set to Tom Jones’s Sex Bomb, was to celebrate the launch of ITV’s The Real Full Monty on Ice.

It was “liked” by several of his rivals, including Barrowman, who said: “Well, well, well!!”

Bell’s brother Martin, also a former GB skier, commented: “Not sure how this outfit would go down with the judges at the Olympics... so to speak.”

Bell shared a clip from the BBC’s Ski Sunday in 2008 in which he taught Jackson some skiing techniques.

Jackson replied: “This was great — loved it and, not gonna lie, you are a very good coach.”

Bell admitted there would be rivalry between him and Jackson, a two-time world champion in the 110m hurdles.

He said: “When we did a Ski Sunday masterclass with a load of celebrities, Colin was our most improved and learned the most in three hours.

“He has great spatial awareness and is massively motivated so I know he’s going to be really good.”