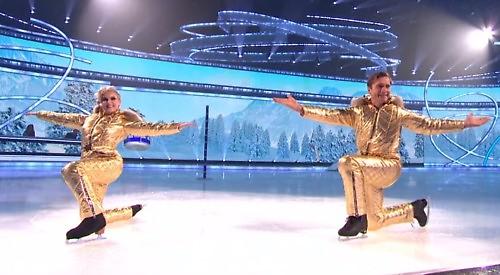 GRAHAM BELL was briefly top of the judges’ leaderboard when he competed for the first time on ITV’s Dancing on Ice.

The former Olympic skier from Henley and his professional partner Karina Manta were awarded a total of 26 points on their debut on Sunday night.

This was the highest score of the series so far until singer Sonny Jay and his partner Angela Egan scored half a point more with their routine. Bell and Manta still made it through to the next round after winning enough votes from the public.

Their routine, set to the theme tune of BBC’s Ski Sunday, which Bell presents, opened with him “skiing” on a miniature slope in front of a screen with a moving background.

The 55-year-old was wearing a reflective gold winter suit with a fur-lined hood and carrying two ski poles.

He launched himself on to the ice, which was decorated with slalom poles, and was joined by Manta in an identical costume. The pair danced in sync and Manta performed the splits in mid-air as Bell held her up. She slid under his legs twice in quick succession then he picked her up again and spun her above the ground by her left arm and leg.

The pair ended by dropping to their left knee at the same time and spinning towards the audience with their arms outstretched.

Judge Ashley Banjo, of the Diversity dance group, gave the pair six points out of 10 while actor John Barrowman and former Olympic figure skaters Jayne Torvill and Christopher Dean each awarded them seven.

Bell’s former professional partner Yebin Mok, who is out of action due to a training accident but continues to coach him, was in the audience and gave the pair a double thumbs-up.

Bell replied: “Well, yes, I’m a skier but this is completely out of my comfort zone. I loved it — the Ski Sunday tune is so important to me and I needed to do it justice for myself and for Yebin.”

Judges praised Bell and Manta but said their performance was sometimes too technical and they should show more feeling.

Barrowman said: “The music was joyful but I felt ‘left out’ by your skating. Sometimes you’d finish a move and look very excited at the camera, which we need to see more often. You need to bring the same passion that you bring to your adventuring.”

Banjo said: “Your ability’s way up there but without a sense of performance it’s just a sequence of moves. I need you to sell it to me.”

Torvill said: “I loved the routine, the concept and the speed — there were a lot of elements to it.”

Dean said: “They’ve given you a ramp, some props and a new partner — what a week it has been for you. It was a great start with amazing outfits and a lot of speed on the ice. It came together so well.”

The six contestants lined up at the end of the show and Bell was told he had made it to the next round.

Singer Myleene Klass received the fewest votes so will compete for survival next week in a “skate-off” against rapper Lady Leshurr, the lowest scorer two weeks ago.

There are 12 contestants in all but they have been split into two groups which dance on alternate weeks to prevent the spread of coronavirus.

Also competing is fellow Olympian Colin Jackson, a sprinter and hurdler whom Bell has previously coached at skiing. He got through this week with a Fifties-themed routine set to Tutti Frutti by Little Richard.

After the show, Bell shared a photo of himself and Manta on social media with the message: “Boooooom, that was tough! Thank you all so much for voting for us. We had so much fun.”

In the previous episode he appeared as part of a group number in which he was the only solo dancer.

He was introduced on Sunday with a montage depicting him riding a motorbike, kayaking and swimming in the River Thames.

He told viewers: “I’d say I’m an adrenaline junkie and wanted to continue the thrill when I quit skiing. Downhill skiing and ice dancing are worlds apart — you might think that I can skate but trust me, I really can’t dance.”

Torvill was then shown comparing his early efforts to “dad dancing”.

Viewers also saw a brief clip of Mok, an American now living in Britain, being taken off the ice on a stretcher after her accident.

She fell and landed on the point of Bell’s skate blade. She suffered a deep cut which had to be stitched up but will make a full recovery.