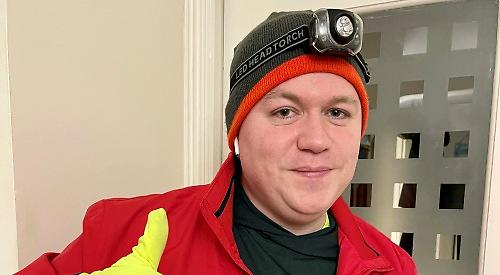 A JEWELLER completed a challenge to run 100 miles in January.

David Rodger-Sharp, who has shops of the same name in Duke Street and Bell Street, Henley, says he was very unfit before the coronavirus pandemic prompted him to do more exercise.

He also stopped drinking alcohol and lost nearly 4kg in a month.

Now he says he has “caught the bug” for running and has his sights set on running a marathon.

Mr Rodger-Sharp, 36, is supporting the Alzheimer’s Society via an online fundraising page.

He said: “I have always been quite unfit. I’ve worked in retail since I was 16 and you have regular hours and lunches and tend to make the wrong decisions when it comes to food.

“When covid came, we all had to decide how we were going to come out of it and I decided to give up alcohol and start exercising. In the past I’ve joined gyms and used them for a month and then stopped going, so this had to be different. I think running and not drinking has made me a better person. It sounds like a cliché but I’m sleeping better and my skin feels better. There are so many benefits and I’ve kind of become addicted to it.

“I found the first few runs to be really challenging and remember thinking, ‘How am I going to cope’ and now I can comfortably run for 5km without walking. It also gives me a bit of me-time — I can think about what I’m going to do with my business. Generally, I feel much better now than I have for a long time.”

Mr Rodger-Sharp, who lives in Reading Road with his husband John Rodger, varies his running routes but most likes going along the river. He runs between three and six miles at a time, usually at night. He explained: “It gets to 8pm or 9pm when I would normally have a glass of wine so I tend to run then because it distracts me. When I’ve run during the day, it takes me four times as long because I bump into customers or friends.

“I’ve set myself a goal of running a marathon — it is a real positive and I can’t imagine my life without running now. I sometimes find myself getting agitated if I don’t get out.”

Mr Rodger-Sharp uses an NHS app called Couch to 5k, which gives tips for beginners and sets out a nine-week schedule for achieving the distance.

He said: “I would encourage anyone to use it. It doesn’t matter what level of fitness you are, it trains you and teaches you how to run for longer. I’m not the fastest runner but I’m not trying to be. It’s about trying to do something that will improve my chances in life. We know that obese people who catch covid get sicker, so that was another motivation.” He chose the charity to support after a customer told him how her mother was suffering with Alzheimer’s disease and then the pandemic happened. She said how distressing she and her mum had found the entire situation,” said Mr Rodger-Sharp.

“If you’re already suffering from a brain condition and then the world around you changes and someone doesn’t understand that, it must be quite terrifying.

“We are raising lots of money for the NHS at the moment and a lot of focus has been on that, so I imagine some of the other charities are finding it hard. Whether I raise £5 or £5,000, every little helps.”

Mr Rodger-Sharp opened his Duke Street shop in 2018 and has expanded the business with the second shop and an on-site workshop. Last month, he bought Henley bakery Lawlors and plans to open a café in Duke Street.

To make a donation, visit bit.ly/2NHEMtb