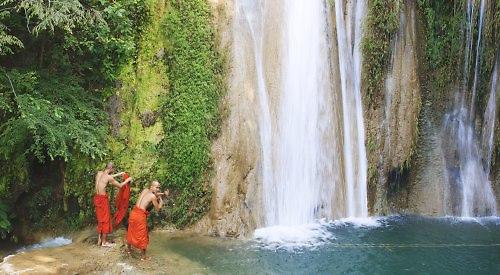 AS whispers travel and sadness spreads, the world turns its ever-critical eye once more to Myanmar.

Decades of democratic progression are on the cusp of once again being snatched away by the hands of a few disgruntled military men.

Myanmar, home to 55 million and my home for more than two years, balances in a delicate state of limbo.

But do not think this is Myanmar. Myanmar is so much more.

It’s a country of frenzied civilian activity as old Korean buses hoot and hurtle into each appearing space, dried thanat cheroot fumes and betel nut smells grapple acrimoniously in the air and the scorching sun beats down on streets lined with sizzling snacks destined to fill the mouths of the food-obsessed people.

It’s a country of overwhelming peace, where the morning silences invite you to stop and gaze as the promised sun rises to ignite the dazzling, golden spires of Shwedagon Pagoda.

It’s the gentle tinkle of monks’ silver alms bowls as they weave the streets in the early hours, it’s the insurmountable magnitude you feel as you float over a vast expanse dotted with thousands of ancient, sun-cracked spires and it’s the serene crashes of the gleaming Indian Ocean meeting the white shores of deserted, palm-fringed beaches.

The true peril here lies in a misjudged footstep on the deep, rickety pavements of Yangon or in the unsuspecting chilli that chastises you for daring to bite it. Rare animals lurk deep in the lush jungles and gnarled valleys of remote regions and monsoon rains loom overhead to suddenly unleash a force so heavy that nothing is spared. The military has no rule here.

But, most importantly, Myanmar is its people. Ever quick to flash you with a smile or to astonish you with hospitality, the 135 distinct ethnic groups each bring to the table their own, centuries-refined twist of colour, flavour and depth.

The result is a heady cocktail of unmatched diversity, immense pride and complex history.

Previously locked in half a century of political isolation, if there’s any nation where resilience defines those who inhabit it, this is it. These people are Myanmar.