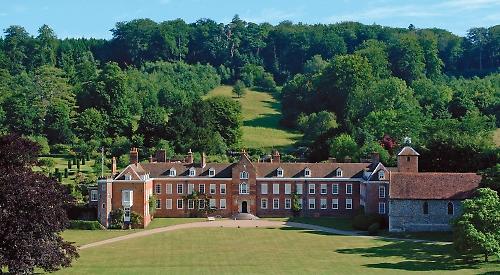 A NEW children’s adventure playground is set to open at Stonor Park this Easter.

Tumblestone Hollow, which is located in woodland next to the estate’s Wonder Woods playground, consists of a series of high-level wooden walkways, climbing nets, look-out decks and bridges linked by a central tower and spiral staircase.

It is suitable for children aged four to 12 and has a fantasy theme with buildings set at unusual angles and decorated with tiles of odd shapes and sizes.

It is based around a recreation of the Neolithic stone circle which gives Stonor its name and which the estate’s 14th century Catholic chapel shares a cornerstone with.

The paths and supporting structures form a series of concentric circles when viewed from above.

The playground. which cost £250,000, was built over the autumn using sustainably- felled chestnut wood.

The Hon William Stonor, who is heir to Stonor Park, and his wife Ailsa came up with the idea a few months after the original playground opened in 2016.

They wanted to create something with its own atmosphere rather than just adding more equipment to the existing facility.

The couple designed the hollow in partnership with Capco, a specialist supplier in Norwich.

A follow-up is now in the pipeline and the books will be sold at the Stonor Park visitor centre.

There will also be a takeaway café called the Hollow Hut, which will sell coffee, burgers and pizza, and a seating area. Mr Stonor said: “We wanted to create something truly magical so we worked up a concept that we could build a story around.

“Capco helped us create a whole world for these characters to live in and it must have tripled the playground in size so it’s very much an attraction in its own right.

“The team really enjoyed building it because they had the freedom to throw out the rule book. Normally, everything has to be in straight lines and strict right angles but we didn’t want any of that. It was a chance to be a bit more creative and whimsical.

“It has been great fun seeing it take shape. We were watching the progress every day and it was very rewarding to have control of the overall look and feel, not just order a series of set pieces from a catalogue. We’ll miss working with everyone but do hope to continue adding to it.

“We also had this crazy idea of publishing a series of stories about characters living around the stones and Amy has brought it to life beautifully, which will make a visit feel more special.”

The opening date wasn’t certain until Prime Minister Boris Johnson confirmed on Monday that outdoor gatherings of either six people or two households are allowed from March 29, when outdoor recreation grounds can re-open.

The playground is provisionally set to open this Easter weekend, subject to guidance from trade bodies.

Mr Stonor said: “Once we’re up and running, we’ll obviously abide by the safety rules as we did when the previous lockdown was relaxed. We were complimented for getting it right at the time, which we were very proud of, and want to keep that up.

“After having their outdoor play restricted for such a long time, this will be enormously beneficial for children and their families. They’ve been crying out for this kind of thing and really need a chance to run around, climb over things and burn off some energy.

“In the long term, this is another step in helping Stonor Park look after itself financially. There’s always an enormous amount of work to be done to ensure the preservation of this historic asset and last year was incredibly tough, though this was thankfully recognised by a grant from the Heritage Lottery Fund.

“We weren’t able to open the house last year and won’t be allowed to for some time this year, so this playground is a safe way to attract more visitors while providing something that’s badly needed.”

The playground was part-funded by the Culture Recovery Fund, a Lottery initiative to protect culturally significant sites from the impact of covid-19.

Last year, the estate spent about £350,000 on refurbishing a leaking flat roof above the west wing of the main house, parts of which date back to the 12th century. Future works could include restoring another flat roof over the medieval hall.