Tennis club spends £6,000 on new decking before players are back on court 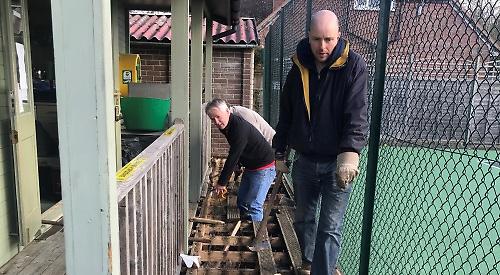 SHIPLAKE Tennis Club is refurbishing its decking area in readiness for a return to play.

The club, which occupies three floodlit courts off Memorial Avenue, next to the Memorial Hall, is to spend up to £6,000 replacing 35 sq m of timbers which have started to rot.

The previous decking was installed less than 20 years ago but water is gathering around the wooden joists supporting it, which weakened the structure.

The club’s committee first spotted it sagging when activities resumed in July last year, shortly after the first coronavirus lockdown was lifted.

They decided to take action this month after reading in the Henley Standard about the Goring Gap Boat Club’s continuing refurbishment of its clubhouse on the River Thames. A group of volunteers has pulled up the old boards and a carpenter will be hired to lay new ones before the club is permitted to re-open under government guidelines on March 29.

Nick Wrigley, the club’s health and safety officer, said: “The decking was in serious need of repair because it was at risk of eventually collapsing, although it wasn’t quite at that stage.

“We’re not a rich club but when we saw how the boat club at Goring was continuing its refurbishment with help from volunteers, we realised we could do something similar with the removal of the old timbers.

“It took us about six hours and it felt good to finally address a potential safety hazard. We’re very much a community club so our members were happy to help.”

The club’s membership dropped from 275 to about 200 during the pandemic as people were declining to renew subscriptions until they knew when they could play again.

It’s hoped this will now go back up but the club, which has only served Shiplake and Binfield Heath, is to expand its catchment to include Henley as a precaution.

Mr Wrigley said: “We’re trying to encourage families because we’ve got a great kids’ training programme and a lot of people could benefit. I think there will be a lot of interest as this is a great little club with a very social atmosphere and people will be very keen to get back outside once the rules allow.”