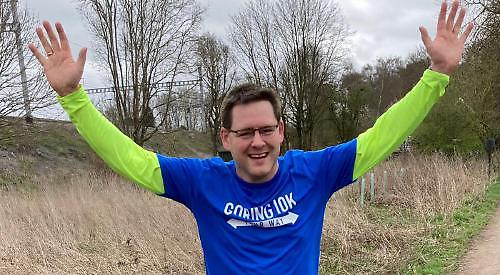 THIS year's Goring 10km race has raised £6,000 for the village primary school despite taking place virtually.

More than 200 villagers took part in the “10K Your Way” challenge last Sunday in which they ran, walked, rowed or cycled the distance at a pace they were comfortable with.

Those doing it outdoors chose their own routes, competing alone or in their family “bubbles”, while others raced indoors using rowing machines, elliptical trainers or exercise bikes.

The usual event, in which up to 1,200 entrants run a 10km circuit of the countryside to the north of the village, couldn't happen because of the coronavirus pandemic.

Proceeds will go to the school's parent-teacher association to pay for a new school library and essential school equipment.

Twenty-two members of staff took part including head teacher Angela Wheatcroft, a keen runner who raised more than £2,200 by completing a total of 160km throughout February and March.

Mrs Wheatcroft, 45, would run about 8km once or twice during the week and then between 10km and 15km on the weekends leading up to the day. She stuck mostly to routes in the Reading area, where she lives.

She was planning to run just 100km and raise £1,000 but she hit both targets so quickly that she decided to be more ambitious.

Now that she has increased her weekly mileage, she says she is enjoying it and wants to keep it up.

She said: “I felt so inspired that I wanted to see how much further I could go and I'm really thankful to everybody who supported me. It was rewarding to see the kilometres clocking up.

“The main 10km run was fine - a bit windy in places but I got up early to do it, and with the clocks having gone forward it really was early.

“There were lots of families taking part and they found lots of different ways of getting involved, whether that was doing it on the day or across the whole week leading up to it.

“I'll probably keep up my own running but I don't want the pressure of entering lots of races. It's just a great way of keeping healthy physically and mentally.”

Race organiser Jules Hopkinson said the virtual event could continue alongside the “real” one once coronavirus restrictions allow.

He said: “Nothing's decided but it's a nice idea because there's an age limit of 15 and although we have children giving medals out at the finish, this allows them to get involved more directly.

“We didn't get the usual entries from people outside the area but our community showed huge enthusiasm and creativity in deciding how they would take part.

“They really loved it and some even said they found routes they didn't know about while they were exploring the countryside. It was a positive experience and a good reason to be having fun outside.”

Last year's Goring 10km narrowly went ahead as it happened just before the first national lockdown was imposed on March 23. Previous events have funded a new £30,000 minibus and new playground markings.

with “goring 10k 2021 staff 1.jpg” to 9 - have asked for shot of kids too, not sure whether to expect but organisers say they will ask parents

let me know which of these pics you're using and I will get first names.

All ran it except the one on the elliptical